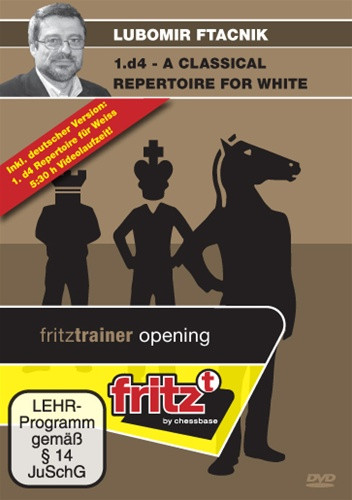 1.d4 - A Classical Repertoire for White

This DVD by Lubomir Ftacnik is an ambitious project, presenting a comprehensive set of ideas and structures in chess openings, arising after the first move 1.d4. In 34 videos (plus Intro and Conclusion) the author covers all 1.d4 openings - classical ones, like all Queen's Gambit lines and the Indian defenses, but also many interesting gambits, like the Benko, Blumenfeld and Budapest. The suggested choices are approved and active, but also safe for the first player. Many hours of explanations and suggestions will significantly shorten the time needed for building up a complete and workable set of opening weapons, usually called a repertoire.


Lubomir Ftacnik is a Slovak Grandmaster, long term cooperator of ChessBase and diligent analyst. For this DVD he has used his experience of three decades on the international chess scene. Just as they have done for many top players, the openings with 1.d4 have served him well throughout his active career. The lines against various defenses have been forged in the fire of battles over the board. Learning more about the 1.d4 repertoire will bring any player a few steps closer to the coveted Grandmaster level.