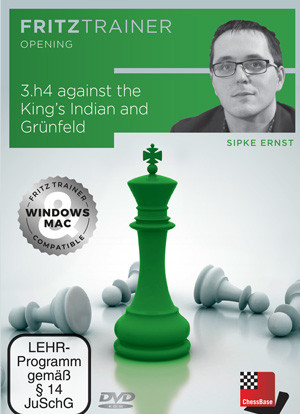 3.h4 against the King's Indian and Grünfeld (Download)
Sipke Ernst

For some time now, we’ve known that the strongest chess engines like to push their flank pawns up the board. This has led to an interesting system, with which we can meet the Grunfeld and the King’s Indian. Studying the mainlines is time consuming, and it is possible that our opponents may know the typical plans in those openings better than us, right? Therefore, it is a great idea to take Grunfeld and King’s Indian players out of their comfort-zone right from the start!System: Windows 7 or higher, Mac OS X (only download)

Let’s go 1.d4 Nf6 2.c4 g6 first and now play 3.h4!?, following in the footsteps of Topalov, who unleashed it against Giri in the candidates tournament of 2016. Since then, numerous games have been played with 3.h4 by the likes of Carlsen, Caruana, Ding and others. After the surprise, Grunfeld players will find it difficult to strike in the centre with their typical ...d5 followed by ...c5 as it is very hard to ignore white’s push on the h-file. Also, the King’s Indian players will find that their usual attacking ideas on the kingside don’t work anymore and will have to resort to other ways of finding counterplay.