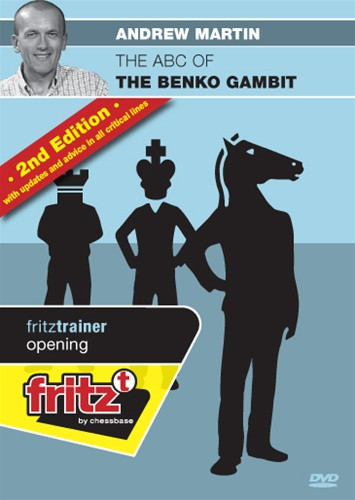 ABC of the Benko Gambit (2nd Ed)
by Andrew Martin

The Benko Gambit is one of the most profound contributions to opening theory of the 20th century. Black sacrifices a pawn as early as move three for enduring positional pressure. On this new ChessBase DVD, International Master Andrew Martin traces the history of the gambit from the games of Opocensky, Lundin and Stoltz back in the 1930s, through the golden age of Bronstein, Benko and Browne all the way to the present day, where the gambit is as popular as ever.
Martin describes the main themes and ideas of the gambit and gives sound guidelines, so that any one who wants to play for the initiative with Black and play the Benko Gambit, will be very well equipped. Do you want to play for the initiative with Black? Then the Benko Gambit is surely for you. The DVD contains 6 hours video lessons, the latest ChessBase 9.0 Reader as well as an unannotated database of thecontents. The 2010 update includes many recent games from top-class play and produces a balanced portrait of how the gambit stands today. Critical lines such as the Fianchetto Variation with an early Rb1 are examined closely and Black is found to be in good shape. The Benko Gambit seems as playable as ever!
Video running time: 6 hours
Andrew Martin is 53 years old and lives in Yateley, England. He is a professional chess teacher and writer.
System requirements: Pentium-Processor at 300 Mhz or higher, 64 MB RAM, Windows 7, Windows XP, Windows Vista, DVD drive, mouse, soundcard.