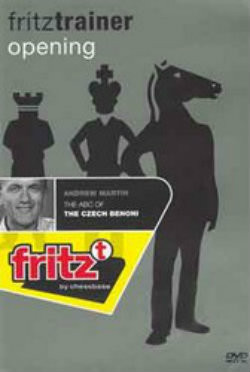 ABC of the Czech Benoni - Chess Opening Software on DVD

The ABC of the Czech Benoni

The Czech Benoni has never quite made it to the top of the charts as a reply to 1.d4. Perhaps it's the very nature of blocked central positions which put people off. Thus after 1.d4 Nf6 2.c4 c5 3.d5 e5 the first impression is that the Black position could become rather passive. In fact it's not difficult to find excellent games by White where he stifles all the life out of Black's game. Repertoire books are similarly pessimistic about Black's chances. But it seems to me that the best Black wins have been forgotten and I'm in good company here, with players of the caliber of Nisipeanu, Ivan Sokolov, Milidanovic taking a fresh look at the opening and using the Czech Benoni with success in recent games. Thus by playing 3...e5, you angle the game into a path of YOUR choosing, which is very much the modern style and very difficult to do with Black. We are going to see some fascinating chess here and by the end of the DVD I hope to have convinced you that the Czech Benoni is well-worth playing.

Andrew Martin is 47 years old and lives in Sandhurst, England, with his wife and four children. He has written several best-selling chess books, including the recent åÔKing's Indian Battle Plans' and åÔSecret Weapons'. He writes for ChessPublishing.com and has several monthly columns at chessville.com, JeremySilman.com and for CHESS magazine. He is a noted trainer and coach.