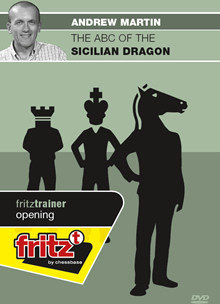 ABC of the Sicilian Dragon - Chess Opening Software on DVD

ABC of the Sicilian Dragon

The Sicilian Dragon is one of the most extensively analyzed openings in the entire realm of chess theory. That is because it is one of Black's best counterattacking options against 1 e4 and therefore very attractive. After 1 e4 c5 2 Nf3 d6 3 d4 cxd4 4 Nxd4 Nf6 5 Nc3 g6! Black develops aggressively and rapidly, has clear intentions on the half-open c-file and the long diagonal. He retains options of levering open the Queenside with the help of ...b7-b5 and ...a7-a5. Black keeps the inherently flexible Sicilian pawn structure intact.

IM Andrew Martin is 50 years old and is the manager of Coaching for the English Chess Federation. This is his 14th DVD for ChessBase.