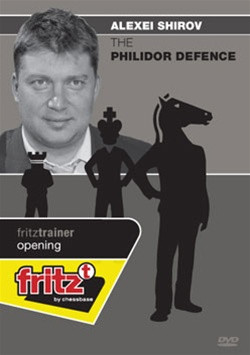 The modern form of the Philidor Defense arises via the move order 1.e4 d6 2.d4 Nf6 3.Nc3 e5 as the main starting position. Then after 4.Nf3 Nbd7, Shirov has introduced the pawn sacrifice 5.g4!? into practice - and achieved excellent results with it. Accepting the sacrifice leads to very sharp positions full of tactical possibilities. Shirov is one of the top connoisseurs of this system, and although he has been very successful with the White pieces in this line, he is always striving for objectivity and shows the possibilities for Black's counterplay as well. If anyone finds the gambit 5.g4!? too double-edged, he can adopt an alternative in the solid, tried and tested strategic approach 5.Bc4 Be7 6.0-0 0-0 7.Re1 c6 8.a4. Also within this system Shirov presents many of his own games, discussing among other things the difficult, but extremely important question whether and when White can advantageously proceed in the center with d4-d5.

The third system presented by Shirov arises after the traditional Philidor move order 1.e4 e5 2.Nf3 d6 3.d4. Black tries to solve his problems by the radical 3...exd4 now, a move which was early on played by Horwitz versus Staunton in 1846 and which recently has come into fashion again. Analyzing his game against Nisipeanu, who apart from Bacrotis one of the experts of Black's way of playing, Shirov shows how White can fight for the advantage in this line.