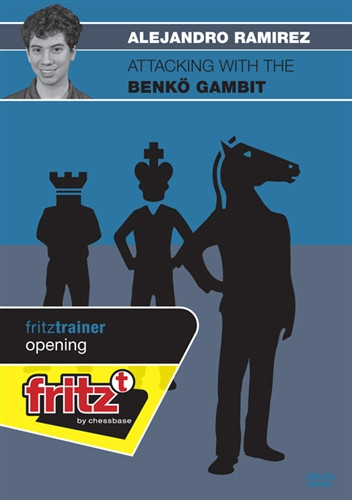 Attacking with the Benko Gambit

Throughout the years, it has become difficult for Black to find active and promising prospects against 1.d4. White players are usually looking for a stable, solid and permanent advantage to torture their opponents with. The Benko Gambit offers Black the possibility, at the cost of a pawn, to shatter these ideals and to be the one who is in the driver's seat as he takes a quick hold of extremely important strategical advantages - superior development, better piece prospects, easier play, clarity of plan, sounder pawn structure, among others! White must be very careful in the Benko, as his attacking prospects are extremely limited and he is reduced to passive play. This DVD covers all the potential variations that arise after 1.d4 Nf6 2.c4 c5 3.d5 b5.

You will gain not only Grandmaster knowledge of the specific lines and variations with the latest games from top GMs - you will also gain the essential strategical and tactical ideas that dominate the Benko Gambit structures and setups, enabling you to outplay your opponent once the opening phase is finished. Carlsen, Kasparov, Anand, Zvjaginsev, Bologan, Vachier-Lagrave and many others have incorporated the Benko Gambit as part of their repertoire - some use it when they want to pressure their opponent from the get-go or when they are in a must-win situation, others as their main defense against 1.d4! Venture into the world of the Benko Gambit and see the results over the board immediately!

Alejandro Ramirez is the only Grandmaster from Central America and achieved his title at the age of 15. Since then he has played in top level events including the World Chess Championship in 2004, three Olympiads and he was the winner of the 2010 US Open. Alejandro is now a prolific chess writer and player who has been using the Benko Gambit his entire life - including in his mini-match against former World Champion Rustam Kasimdzhanov.