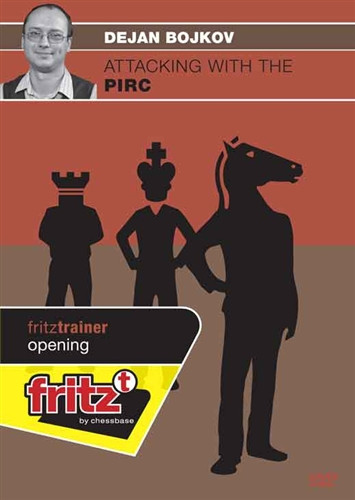 Attacking with the Pirc - Chess Opening Software on DVD

The Slovenian GM Vasja Pirc was a five time Yugoslavian champion. This speaks volumes for his playing strength but there is a more important contribution which he has made to the chess world. The defense which he explored in detail after the moves 1.e4 d6 2.d4 Nf6 3.Nc3 g6 is named after him. There were ups and downs in the appearance of the Pirc in tournament practice. Many people considered it dubious. However, the Pirc survived and it is coming back into fashion nowadays again. The reasons for that are the flexible nature of the position and the variety of possibilities that both sides have. One should expect that the fewer options which White has the easier the defense would be. Indeed, there is logic in that, but, on the other hand, correct play by both sides should lead to a draw. Instead of this approach the Bulgarian Grandmaster Dejan Bojkov offers an aggressive repertoire for the second player in this new DVD. Black risks more than usual but hopes for higher dividends in return for the risk. The original analyses on the DVD will help the reader control the risk involved.

Dejan Bojkov is a Bulgarian GM, rated 2544. He was Bulgarian national champion in 2009, and is a member of the Bulgarian national team. He is also the current trainer of former world women`s champion Antoaneta Stefanova.
System requirements: Pentium-Processor at 300 Mhz or higher, 64 MB RAM, Windows 7, Windows XP, Windows Vista, DVD drive, mouse, soundcard