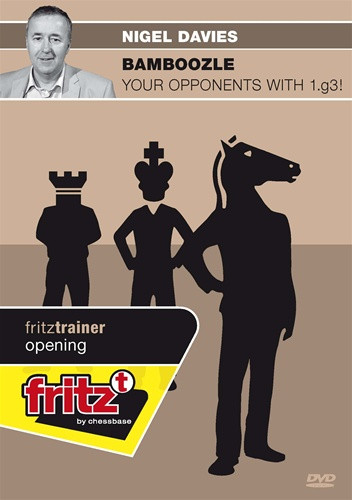 Bamboozle your Opponents with 1.g3 - Chess Opening Software on DVD

Bamboozle your Opponents with 1.g3

Opening a game with 1.g3 appears rather quiet and unpretentious, yet many of the greatest players in history have chosen to play this way. Bent Larsen, Victor Korchnoi, Leonid Stein and Pal Benko have all wielded this move with considerable success while in more recent times Mikhail Gurevich has been using it highly effectively.
The idea behind this opening is to leave White with the greatest possible flexibility for his pieces and center pawns and indeed the game can transpose into openings as diverse as the Closed Sicilian, the King's Indian Defense and the Catalan Opening. Yet White can also choose to tread new ground by adopting formations such as a reversed Leningrad Dutch, reversed Alekhine's Defense or even a reversed Pirc or Modern Defense. All of these formations contain far more poison with White's extra tempo. On this DVD Davies explains key concepts and ideas behind these unique approaches, while also showing how White can transpose into more regular openings if he chooses. This adaptability can provide many opportunities for throwing the opponent on his own resources as well as wrong footing him into something he does not know.
Video running time: 4 hours
Nigel Davies has been an International Grandmaster since 1993 and is a former British Open Quickplay and U21 Champion. Besides his playing accomplishments he is an experienced chess coach with an ability to explain chess ideas players of any level. He is an acknowledged expert on 1.g3 having played it on numerous occasions in his own games.
Bamboozle your opponents with 1.g3 Video Clip
System requirements: Pentium-Processor at 300 Mhz or higher, 64 MB RAM, Windows XP, Windows Vista, DVD drive, mouse, soundcard.