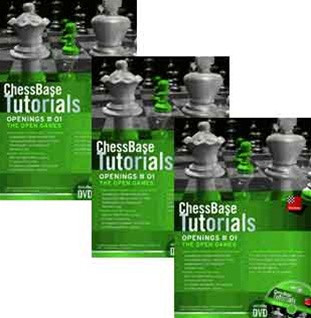 How do you do your opening training? Do you try in vain to commit to memory sequences of moves as far as move 15 or even 20? Do you work your way through thick tomes in order to laboriously collect the most important information? Or do you simply keep on playing the same opening, just because by chance you learned a little about it years ago and because it is in any case too complicated and time-consuming to learn something new? Or do you simply not bother with opening theory, but continue to be annoyed about being at a disadvantage before you really get into the game proper?

Fortunately there is no need for opening training to be like that, because for all those who are looking for a compact and entertaining survey of the openings, there are now the new ChessBase Opening Tutorials. The first volume of this new series contains in 24 lectures all the basic knowledge for the open game, that is to say all the important systems after 1.e4 e5. In video clips of at most ten to fifteen minutes, Masters and Grandmasters explain the variations and the ideas behind the various ways of starting the game, meaning that you can concentrate on the essentials.

The advantage for a club player: for an investment in time of only four to six hours, you get an overview of such different openings as the King's Gambit, the Ruy Lopez, the Giuoco Piano, the Scotch and the Petroff, to name but the most important and the most popular. And who knows, perhaps during this instructive and entertaining tour through the world of the openings, you will discover a totally new favorite opening, which you had previously not noticed or which had appeared too complicated. For your next game at the club evening or during a team match, you will have a nice surprise up your sleeve for your opponent. We have made sure that there is variety in our video lectures by dividing up the task of presenting the material to you among several authors.

The first volume contains videos in English by Lawrence Trent, Valeri Lilov, Lars Schandorff and Adrian Mikhalchishin. But at the same time on the DVD you will find the 24 videos in German, for which Jan Gustafsson, Karsten Meuller, Niclas Huschenbeth (German champion 2010) and Elisabeth Pihtz took their place in front of the camera. But not only the idea of several authors on a single DVD is new; there is also the bi-lingual accompanying booklet, which is set up in the same format as ChessBase Magazine and which runs through briefly in print all the openings which were presented in the videos. This was conceived for those of you who would like to do more than sit in front of a computer, but would like from time to time to pick up and flick through a book. This turns chess training into fun, and it equips you for the serious business of playing the game.


* Caro-Kann (3 videos)
* French (5 videos)
* Scandinavian (1 video)
* Sicilian (12 videos)
* Alekhine Defense (1 videos)
* Pirc (1 video)
* Nimzowitsch and Owen Defenses (1 video).
The major areas of the Sicilian are subdivided into:
* Najdorf (3 videos)
* Sveshnikov (2 videos)
* Scheveningen System (1 video)
* Paulsen and Taimanov (1 video)
* Dragon (1 video)
* Richter-Rauser Attack (1
* Rossolimo (1 video)
* Alapin (1 video)
* Closed Sicilian (1 video)
Most of the videos last between 13 and 16 minutes, meaning that in something like six hours you can get a survey of this immensely important area of opening theory. This time five authors went before the camera for the videos in English, of whom you already know Lawrence Trent (6 videos), Valeri Lilov (6 videos) and Lars Schandorff (3 videos) from the first volume. You will be glad to welcome Daniel King (6 videos) and Sam Collins (3 videos) as new authors. In the English/German accompanying booklet, the 22 pages in each language offer short descriptions of the openings. This is intended on the one hand to help you orient yourself and on the other to make possible an entertaining introduction to the world of the Semi-Open Games. Last but not least, there is also a database which contains 100 outstanding games from the opening areas which are being presented.


ALL YOU NEED TO KNOW ABOUT:
* Slav, Semi-Slav and Catalan
* Queen's Gambit Declined to Chigorin
* London and Colle System
* Blackmar-Diemer Gambit, Albin Counter-Gambit

MODERN OPENING TRAINING
* DVD: 24 videos with a total of 5 hours running time
* Accompanying booklet: An overview of all the important systems

Get 3 Tutorials for one Low Price