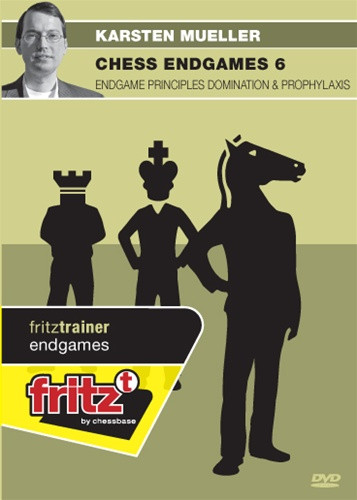 Karsten Mueller's endgame course has already taken its place among the modern classics in the study of the endgame. Whereas the first 4 DVDs of his series were systematically organized according to the distribution of material, Volume 6 continues the explanation of general endgame principles begun in Volume 5. The principles dealt with in this DVD are domination and prophylaxis, don't be over-hasty, zugzwang and schematic thinking. Domination is the goal of methods involving restraint and restriction. Gradually keep on forcing your opponent on to the back foot, that is often the simplest route to victory. Strategies for the restraint of the individual pieces are demonstrated, with a lot of emphasis on keeping Knights on a short leash.

Prophylaxis is an individual and extremely important way of thinking. You spot your opponent's ideas and plans early on, so that you can take counter-measures in good time. The principle "Don't be over-hasty" is one that has to be observed not only in the ending. Let Karsten Mueller show you the conditions under which you should take heed of it and specifically how you should employ it. Zugzwang, on the other hand, is a typical endgame phenomenon. Important techniques such as triangulation and the battle for reserve tempi are dealt with in detail. Schematic thinking is one of the few areas in which the human being is still superior to the computer. But be careful! No amount of schematic thinking can ever replace concrete calculation, and every rule of thumb has its exceptions. This DVD will help you learn what you must watch out for.
Video runnig time: 5 hours.

Since 1988 Grandmaster Dr. Karsten Mueller from Hamburg plays for the Hamburger Schachklub in the Bundesliga and in 1996 and 1997 he finished third in the German Championship. As an internationally renowned endgame expert he is the author of the endgame column in the ChessBase magazine.