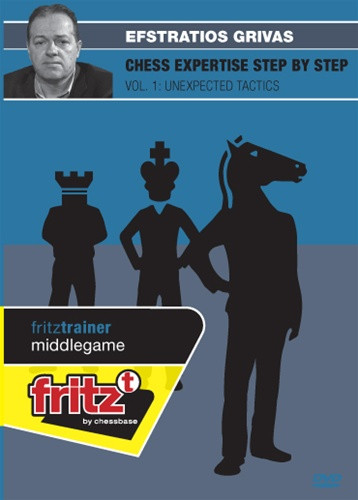 Tactics in chess are sequences of moves which limit the opponent's options and may result in a tangible gain by force.Tactical themesare usually contrasted with strategy, in which advantages take longer to be realized and where the opponent is less constrained in his choice of reply. Tactics are an essential part of chess, since even purely positional games may contain certain moments where one cannot do without sharp calculations.

The fundamental building blocks of tactics are forks, skewers, batteries, discovered attacks, undermining, overloading, deflection, pins and interference. This DVD covers important sections of this field and helps to understand in depth the proper handling of (unexpected) tactics in certain cases. We will examine how to achieve (or to avoid) mate on the back rank, the strength of the "dancing" Knights, how to sac the Queen near the opposing King, how to march with the King, how to use efficiently the f4-break and finally how to make sacrifices to gain the initiative. As Nigel Short once said, "Modern chess is too much concerned with things like pawn structure. Forget it - checkmate ends the game!"