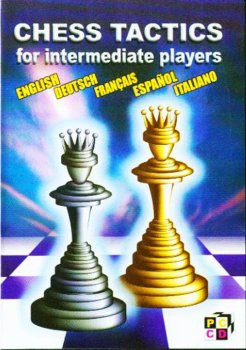 Chess Tactics for Intermediate Players is based on a bestseller by one of the most experienced coaches in Russia, Sergey Ivashchenko. It is a sequel to the popular program Chess Tactics for Beginners.

Quickly improve your chess play with chess tactics testing and training program intended for intermediate players. Among the topics covered:

The program is designed for chess players with the ELO level of 1600-2200 points.

The exercises are arranged in 19 sections according to their increasing difficulty. All the sections contain exercises for Practice and Test. After you have solved a problem, you are given a ELO rating. This rating is based on the difficulty of the problem, the time taken, and errors, if any. Your original rating is adjusted up or down after each exercise.

The program includes more than 1,170 tactical problems classified according to topics and difficulty. Every position is included in all these four courses. Each course contains examples for Practice and Test.

You have to find the best moves. If you make a mistake while solving a problem, the program helps you with various visual hints (such as arrows showing key lines of attack), and eventually shows the piece which is to move.

The program has a built-in playing engine, Crafty,which can be called upon to analyze the problem more thoroughly than the offered solution gives.

You can also use your favorite external playing program.

The program generates a student's ELO and statistics in easy-to-read bar graphs, based on a student's success rate with the exercises. This is a great way to keep track of your progress.

Multiple user profiles are possible with independent ratings and all other individual information. Statistics are stored and can be compared between different users.

Board design - Simple, Wooden or Marble.

There is also an option of printing either topics or positions:

The program is terrific for both individual chess players and coaches.