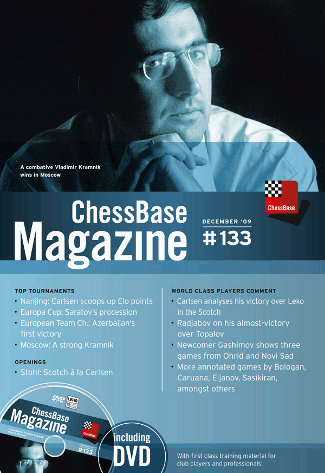 In his 16 minute introductory video, GM Karsten MÌ?ller outlines the main points of this DVD and presents Carlsen's first round victory over Leko from Nanjing and Bacrot's strong innovation in the popular Anti-Meran against Aronian - two star games from this issue. At the same time he summarises in the Caro-Kann with 3.f3 and a compact repertoire for Black against the French Tarrasch Variation, only two of the 12 openings articles in this issue. Click here or on the image of the video on the left and let Karsten MÌ?ller get you in the mood for CBM 133!

GM Dorian Rogozenco reviews in chronological order on two videos the four tournament highlights of the past autumn. From the super-tournament in Nanjing he explains Carlsen's victories over Topalov and Jakovenko. In his remarks describes in exemplary fashion the qualities of the young Norwegian. And the European Cup in Ohrid also offered a plethora of theoretically significant games that are also worth seeing; Rogozenco introduces one game each from Motylev and Sargissian. To finish, Rogozenco describes the decisive moment in the European Championship in Novi Sad.

In Rogozenco's evaluation the Tal memorial in Moscow represents the strongest tournament of the year and not just because it included in Anand and Kramnik, a World Champion and an ex-World Champion. As an example of the high level of theoretical work prepared for the opening, he introduces the game Anand - Leko with a surprising innovation in a popular variation of the Anti-Meran. A further example is Kramnik's innovation against Svidler's GrÌ?nfeld Defense. Rogozenco's analysis of the game Ivanchuk - Kramnik, which comes at the end of this second video, makes clear just how open the result of the Tal Memorial was until the very last minute. The Ukrainian had built up a brilliant attacking position and with the correct continuation could have wrested the tournament victory away from Kramnik.

This high point of the season in Moscow saw at the start, apart from Topalov, the complete and absolute world elite including Carlsen, Anand, Kramnik, Aronian, and Ivanchuk. Added to that were Gelfand, Leko, Svidler, Morozevich and Ponomariov. After Carlsen's triumph in China there was great excitement: would the Norwegian be able to continue his triumphal procession in Moscow? But in the very first round Kramnik's game against the Norwegian revealed that he was full of ideas and ambition. After his third round victory over Morozevich he reined in Svidler in round 4 in the latter's special opening, the GrÌ?nfeld Defense. Two rounds later Kramnik managed another convincing win with White over Ponomariov and this almost decided the tournament victory. You will find all the games from the Tal Memorial as well as a tournament report here or via "Tal Memorial" in the left-hand column.

Sometimes numbers simply say more than words. With 8 out of 10, an Elo performance of 3002, 5 out of 5 with the White pieces, not a single defeat and a lead of 2.5 points, Magnus Carlsen celebrated his first tournament victory of the year. A triumphal procession in the former Chinese imperial city of Nanjing for the young Norwegian dressed in red brocade. On the DVD Carlsen annotates his first round victory against Peter Leko, against whom he employed the Scotch Game, one of the weapons of his new trainer, Garry Kasparov.

Geographically Azerbaijan is on the western shores of the Caspian Sea and thus on the extreme edge of Europe. From the point of view of chess, the country has come right into the middle of Europe with its victory in the ECh in Novi Sad. Whereas on board 1 Radjabov was going through a slight crisis in his form, Gashimov, Mamedyarov and Mamedov were according to ELO performance among the six best players in the ECh. Vugar Gashimov has annotated two of his games for this CBM, including the decisive victory over Stellwagen in the final round.

Seven rounds, seven victories - this majestic result won for the team of Economist Saratov the European Club Cup in Ohrid. The Russian team with Alekseev, Eljanov, Ni Hua, Bu Xiangzhi, Moiseenko etc. displayed good nerves right up until the end and secured the gold medal in the last round with a 3.5-2.5 victory over Ashdod Illit from Israel. Top scorers for the victorious team were Alexander Moiseenko and - once more - Pavel Eljanov.

From opening trap to endgame study

Training in ChessBase Magazine starts with the very first moves and takes in all the phases of a game of chess. The 12 up-to-date openings articles with their numerous ideas and suggestions for your repertoire can be found here or above among the links. On this occasion Rainer Knaak has selected his opening traps - exclusively from the European Cup. For Dragon fans, the main interest will be the two contributions in video format: Leonid Kritz has investigated a sub-variation of the main line with 9.Bc4 and Dorian Rogozenco concentrates on the move order 9.0-0-0 d5. You will find these and other videos in the column Fritztrainer. In his Strategy column Peter Wells casts some light on the theme of åÒThe safety of the king in simplified positionsåÓ. In Daniel King's long running Move by Move there is an instructive game from the Europa Cup there for training. And in the Tactics and Endgame columns Oliver Reeh and Karsten MÌ?ller have once more assembled for you all that is best in recent tournament praxis.

Get your ChessBase Magazine Subscription