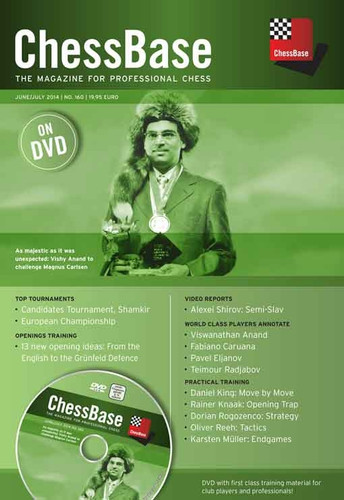 Using the blue "Buy Now!" button will take you to ChessBase Store
where you can purchase this Download in a secure environment. It is simple and fast.
You will have your new Download within minutes!

FIDE Candidates: Visy Anand was the only player to remain undefeated on +3 and thus safely took victory setting up another WCh-match with Carlsen. The tournament winner has annotated his nice win against Topalov for us.

Gashimov Memorial: World champion Magnus Carlsen thanks to an outstanding second half won the tournament by a clear point. Carlsen's conquerors Caruana and Radjabov have annotated their victories. In addition to this, the Video Download offers Daniel Kings "game of the day" video for every round.

European Championship: Alexander Motylev became the new European champion scoring an outstanding 9 out of 11. Bartel, Eljanov, Motylev, Postny and Roiz have annotated their games for us.

NEW! With this issue German federal trainer GM Dorian Rogozenco starts a new series in ChessBase Magazine: in the ??Classic?? he shows you a master game from the history of chess and at the decisive moments he asks you how you would continue. Here you can learn about the ??classic?? ways to win a game, strategies and endgame techniques, which are also so very worthwhile knowing for club and amateur chess. Take the test! To start his series Rogonzenco has selected for you the game Lasker-Bauer (Amsterdam 1889).

Interactive training lectures with video feedback to your ideas: Daniel King "Move by Move??, Oliver Reeh ??Tactics" and Karsten Müller "Endgames?? - get on a move!