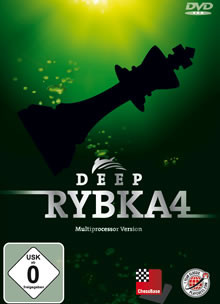 Multiprocessor/Dual Core Version
Computer Chess World Champion
Rybka isn't just a chess program it's a bona fide chess legend. Rybka has been the World Computer Chess Champion since 2007, easily taking on all comers to retain its crown. It's arguably the most lauded, most praised, most talked-about chess engine ever.


What's different and exciting about the new Rybka 4?

All of these combined improvements mean that Deep Rybka 4 is better, stronger, and laser-accurate in its evaluations than even its legendary predecessors.

For years Rybka has been the uncontested number one in computer chess and since its great breakthrough in 2006 the program has won with remarkable regularity one world title after the other. So that this state of affairs will continue in the future, the Rybka-team gathered around programmer Vasik Rajlich has developed a new version which is even better: Deep Rybka 4 plays more aggressively and more tactically.

During the last two years the engine has been improved in almost all areas. One major theme has been the understanding of the attack on the King. The new Deep Rybka 4 is more precise and reliable than its predecessor. At the same time the search function now operates more quickly and efficiently and the evaluation function delivers even more spot-on judgments.

As for the playing style, Rybka 4 logically continues the development of the past few years. Thanks to further development in the tactical area too, the new Deep Rybka 4 will be indispensable for all those who work and analyze with chess engines. Rybka 4 is delivered with the new user-friendly Fritz 12 interface and contains a database of 1.5 million games and includes Classic membership for Playchess. com for one year.

Today the main use of chess software is interactive analysis. Rybka's superior playing strength helps you to quickly assess a position. But analysis with Deep Rybka 4 is much more than just evaluations and best moves. In the user interface designed by ChessBase, Rybka 4 introduces several ground-breaking new analysis features:

Monte Carlo Analysis in Deep Rybka 4: yields precise evaluations by playing thousands of ultra-fast games in a few minutes in a given position. This is very much like using game result statistics, something human players do when choosing their opening variations. Monte Carlo Analysis can be used in any position, but generally it's most useful in two types of positions:

1) Endgames. Many engines often give high scores to drawn endgames (and sometimes low scores to winning ones). Monte Carlo recognizes fortresses and other no-progress situations. It's also good in Rook endgames, which are another computer problem.

2) Positions. There are games where one side has made a big material sacrifice for slow compensation (i.e. not just tactics). For instance you can find lots of piece sacrifices in famous Grandmaster chess games which no computer will correctly appreciate - but which Monte Carlo gets right.

Interesting: in the starting position the Monte Carlo Analysis gives a 52.8% win probability for White.

Sampled Search in Deep Rybka 4: gives detailed information about the search process, showing scores and alternative moves in the main line. This is helpful when the program searches for a long time in one position. It lets the users see how the engine is thinking and making its decisions.

Note that in in the live search you can see that the Rybka engine is working on Kasparov's famous 30.Rxb7 sacrifice, which has not turned up in the engine window yet (it will become the main variation after the next iteration). Note too that the square Chess Informant symbol behind certain moves means that these are forced.

Singular Moves in Deep Rybka 4: are annotated graphically. This indicates situations where only one clearly best move exists.

Look for win in Deep Rybka 4: Whenever you feel that there should be a forced win in a position you can explicitly ask for it. Rybka then searches for a decisive move, considerably faster than in normal analysis.

Persistent Hash Tables in Deep Rybka 4: Rybka can save its hash tables between analysis sessions to preserve valuable information already accumulated in the search tree.

The author of Rybka, Czech-American International Master Vasik Rajlich, has implemented an extraordinary understanding of dynamic factors into his program. This often results in long-term pawn or exchange sacrifices and an active positional playing style resembling human chess. Rybka scores well in all types of situations but dominates especially in asymmetric positions which arise e.g. from Sicilian systems.

The Rykba 4 Opening Book
The Rybka 4 opening book is a high-class compilation of opening theory. It was developed for the world's strongest chess entity - 100 cores cluster Rybka and chess software program Rybka 4 and will maximize the program's playing strength. The choice of variations in the book is well suited to the style of the program, and the book has been fine-tuned and checked in thousands of games.

The Rybka 4 Book includes 17 million positions and over 700,000 games, which were selected from following sources: TOP human practice, correspondence chess games and computer chess games (up to April 2010). And this is only the starting point: the value of the book lies in over 700 original analysis and move choices, which lead to a re-evaluation in many critical points of modern theory. This makes it useful for tournament and correspondence players alike. The book contains a lot of computer-checked analysis never published anywhere before.

The author of the Rybka 4 book is Jiri Dufek (national master, FIDE 2276, ICCF IM 2579), one of the worldÌ´ÌÓs leading experts in chess opening theory. Jiri Dufek has been on the Rybka team since the summer 2009, and his preparation is used in all official events after this date, which Rykba won. During the World Championship match even Vishy Anand and Veselin Topalov worked as second of Veselin Topalov. In his long chess career he won the Czech Correspondence Team Chess Championship and wrote together with Roman Chytilek book Beating the French Defence (in Czech only).

Note that Rybka 4 includes a database of one million games, and that the purchase of the program entitles you to one year of access to the chess server Playchess.com. Rybka 4 is a UCI engine, with 32 and 64-bit versions included in the package. Rybka can be made the default engine in ChessBase 10.


Check Out all versions of Rybka 4 Chess Software