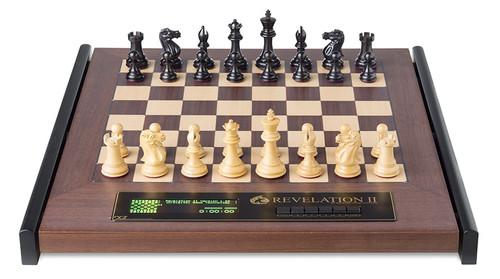 * A new and faster processor: Multi-core, 1.0 GHz.
* An increased ELO of 3000+
* New and improved engines including:
Challenge yourself by Challenging Revelation

Designed for your ultimate chess playing experience, Revelation is the perfect combination of a luxurious wooden chess board and integrated chess computer system developed in the Netherlands by Digital Game Technology and Phoenix Chess Systems.

This amazing tournament size chess board is an innovative DGT sensor board with individual piece recognition and inlaid LED lights to indicate the chess moves. The green LED display and six large keys make it easy to operate the boards menu(s). The menu(s) are available in English, French, German, Dutch and Spanish. Complete it with your personal choice of hand carved electronic DGT chess pieces, offered separately.
Available in e-Board Mode.
Revelation II Anniversary Edition

Revelation unites multiple super strong commercial and freeware chess engines resulting in a great diversity in computerized chess play at ELO levels up to 3000 and above.

Besides the already embedded engines, the system can make use of engines running on PC through the wireless Bluetooth UCI Server. With the option to add more engines and with upgrade possibilities for additional Flash Storage, stronger (Multi-Core) CPU and new software or hardware add-ins, your chess pleasure is guaranteed future proof!

Retro Software is available that allows Revelation users to play against nostalgic chess computers from the past. The Retro Software will take you back to the 1980's and 1990's when the first chess computer were released, adding even more flavor and diversity to your ultimate chess playing experience. Learn more here.

Quote from the Fruit website: "Fruit is vice world computer chess champion 2005 and one of the strongest chess programs in the world (true as of the year 2005)."

Quote from the Ruffian website: "Ruffian has a ranking around 2400 and peaked at 2478 with that hardware."

Quote from the Baron website: "The development of Baron started in August 2001. My intention is to make it a knowledge based engine rather than a fast searching engine."

Quote from the Fruit website: Rybka is a stand-alone UCI chess engine which can be used to play chess games or to analyze chess positions.

Quote from the Shredder website: "Since 1996 Shredder has won seventeen titles as World Computer Chess Champion which makes Shredder the most successful chess program ever."

Toga II is a derivative engine of Fruit with improved strength.

Processor
Revelation II Anniversary Edition: Multi Core, 1.0 GHz.
Fully standalone chess board, equipped with on-board embedded Marvell PXA320 high performance processor to facilitate the on-board chess engines
The PXA320 is the fastest processor in the well-known PXA/XSCALE series and runs at 800+ MHz. The implementation of this PXA320 has a 32 bit wide data-bus,        and a large CPU cache to ensure that the engines will run at their best performance

Engines
The system contains three commercial engines at delivery and can be upgraded with more chess engines in the future
Top performing chess engines included are Hiarcs, Shredder and Komodo.
Freeware and/or open source engines such as well-known programs Fruit, Toga, Ruffian and Rybka are also included

Elo-levels
ELO levels can be adjusted to play at your level (depending on engine settings)
Compared to running the same chess engines on a PC or laptop, Revelation offers unique options and possibilities such as the possibility to turn down the speed of      the on-board processor to play at levels from 1500 ELO and up

Electronic piece recognition
The chess board is using the great individual piece recognition technology from DGT ensuring that analyzing and setting up chess positions is simply a case of            placing the pieces on the board
All available electronic DGT chess pieces are compatible with Revelation II: Timeless, Classic, Royal, Venus (no longer available),  Royal and the official FIDE sets;      all sets are supplied with two queens for each color.

Design
Board size is 57 x 61 cm, square size is 52 x 52 mm and the board thickness is 30 mm
All focus is upon beauty and passion for the chess game, so despite all on-board electronics, Revelation has a fine wooden chess board of high quality with great        wooden pieces

Bluetooth and online connection
Through Bluetooth 2.0 communication with the PC the system can be upgraded with latest available firmware, new chess engines and engine upgrades
Revelation can function as a regular DGT Bluetooth e-Board offering options such as live broadcasting of games via the internet and online play at chess portals          and websites