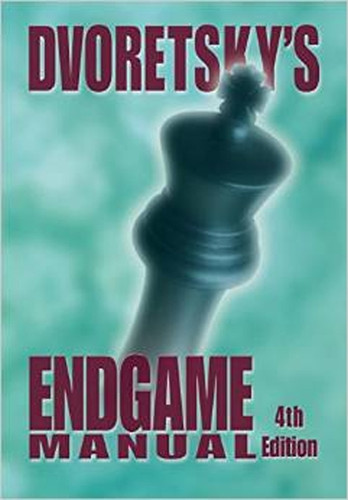 The Fourth Edition of a modern classic! When you are serious about improving your endgame skills, it is time for Dvoretsky's Endgame Manual. Perhaps the best known and most respected instructor of world class chess players, Mark Dvoretsky has produced a comprehensive work on the endgame that will reward players of all strengths. For those ready to immerse themselves in endgame theory, there may be no better manual available today. But, even if you do not play at master level, the book has been designed to help your endgame too.

Basic theories and "must-know" concepts are highlighted in blue. You may skip the more complex analysis, focus on the text in blue, and still improve your endgame technique. When it appeared in 2003, the first edition of Dvoretsky's Endgame Manual was immediately recognized by novice and master alike as one of the best books ever published on the endgame. The enlarged and revised fourth edition is better than ever! "I am sure that those who study this work carefully will not only play the endgame better, but overall, their play will improve. One of the secrets of the Russian chess school is now before you, dear reader!" - from the Foreword to the first edition by Grandmaster Artur Yusupov "Going through this book will certainly improve your endgame knowledge, but just as important, it will also greatly improve your ability to calculate variations....What really impresses me is the deep level of analysis in the book....All I can say is: This is a great book. I hope it will bring you as much pleasure as it has me."

From the Preface to the first edition by International Grandmaster Jacob Aagaard. Here's what they had to say about the First Edition: "Dvoretsky's Endgame Manual...may well be the chess book of the year....[It] comes close to an ultimate one-volume manual on the endgame." - Lubomir Kavalek in his chess column of December 1, 2003 in the Washington Post. "Dvoretsky's Endgame Manual is quite simply a masterpiece of research and insight. It is a tremendous contribution to endgame literature, certainly the most important one in many years, and destined to be a classic of the literature (if it isn't already one). The famous trainer Mark Dvoretsky has put together a vast number of examples that he has not only collected, but analysed and tested with some of the world's strongest players. This is a particularly important book from the standpoint of clarifying, correcting, and extending the theory