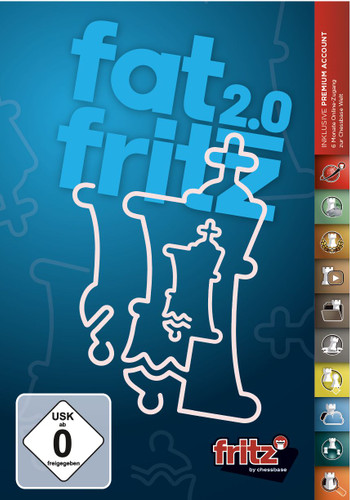 Fat Fritz 2.0 is the successor to the revolutionary Fat Fritz, which was based on the famous AlphaZero algorithms. Using a new Japanese AI technology that achieves optimal performance on regular computer processors (CPUs – no expensive graphics card required) it combines the best of both worlds: a massive new neural network, trained by Albert Silver with the original Fat Fritz, while learning from the surgical precision of Stockfish’s legendary search. This new version takes chess analysis to the next level and is a must for players of all skill levels, whether beginner or professional, who won’t accept any compromises. Its understanding is unparalleled, as it learned by literally studying billions of chess positions.

Fat Fritz 2 comes with the latest version of the most advanced chess playing interface in the world, which provides coach functions, automatic game analysis, a database with 1 million games as well as a six-month subscription to ChessBase Premium Account.

*Fat Fritz 2 is an original neural network that is powered by a modified version of Stockfish, an open-source project licensed through the GPL v3 with all due rights. The source code of Stockfish and the modifications for Fat Fritz 2 can be found on Github.