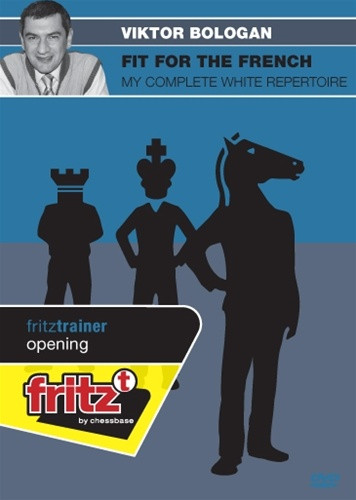 Fit for the French - Chess Opening Software on DVD

Viktor Bologan: Fit for the French

On this Fritz Trainer DVD Viktor Bologan presents his repertoire against the French Defense. The only way to combat this opening is to choose an aggressive plan, and according to Bologan the best such plan starts with 3.Nc3. The Moldavian Grandmaster has had this continuation in his armoury for 20 years, since he was initiated into the secrets of the French by the top trainer Zigurds Lanka -and he has been extremely successful with it. Bologan goes on to recommend only the main lines and once again his choice falls on the most aggressive ones, such as, for example, Qd1-g4 in the Winawer lines.
Video running time: 5 hrs 20 min.
Viktor Bologan is a pupil of the top Moldovan trainer Vecheslav Chebanenko. For many years Bologan has been the number 1 in Moldova and has represented his country in nine chess Olympiads. His greatest successes were in 2003, when he first of all won the Aeroflot Open and then the famous Dortmund Tournament, ahead of Kramnik and Anand. The Moldovan has extensive experience as a trainer and has also published his first books.
System requirements: Pentium-Processor at 300 Mhz or higher, 64 MB RAM, Windows 7, Windows XP, Windows Vista, DVD drive, mouse, soundcard.