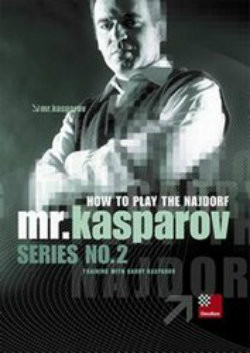 Garry Kasparov: How to play the Najdorf (Part 1) - Chess Opening Software on DVD

Garry Kasparov: How to play the Najdorf, Vol. 1

For Garry Kasparov, this added up to experience with the Najdorf at the very highest levels of chess. For chess amateurs and professionals alike it is a great moment when the world's leading expert shares all the secrets in his favorite opening. In part one Garry Kasparov introduces the various sub-systems of the Najdorf, including the central "Poisoned Pawn" variation. The development of each line is placed in historical perspective and examined in great depth, with Kasparov's characteristic intensity. With more than two 2.5 hours of first-class private tuition, this DVD can be played both on a PC and a DVD player, using your living-room TV set (PAL). It contains subtitles in English, German, Spanish, Italian and Turkish. The package includes the latest ChessBase 9.0 Reader, a big reference database featuring more than 16,000 Najdorf games, as well as a complete opening book that can be used to practice what you have learned with Fritz.