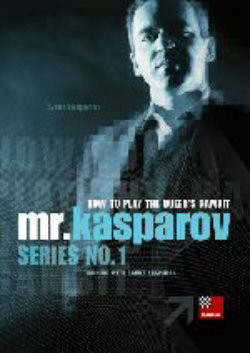 Garry Kasparov: How to Play the Queen's Gambit - Chess Opening Trainer on DVD

Garry Kasparov: How to Play the Queen's Gambit

Wherever he appears, chess fans gather in crowds. Garry Kasparov is the strongest chess player of our time - and a great personality who can represent the sport like no other chess professional. Now Kasparov comes into your home and shares with you his knowledge of one of the great openings in chess. Garry Kasparov took to the Queen's Gambit at a relatively late stage of his chess career, but then had the best training anyone could imagine: in his first match for the world championship against Anatoly Karpov, this opening appeared on the board no less than 19 times. Now he shares his knowledge with you. With great eloquence Kasparov speaks about variations and ideas of the Classical Queen's Gambit, the basics of which were laid by the champions of their times - Steinitz, Lasker, Rubinstein, Capablanca and Alekhine.

Kasparov does not just work through the variations one by one - fluent transitions make the chess students understand the ideas and see new connections. Even people who don't actually play this opening will benefit enormously from Kasparov's explanations, learning from this genius's vast knowledge of the game and his views on chess history. More than three hours of first-class private tuition. The DVD can be played both on a PC and a DVD player, using your living-room TV set. It contains subtitles in English, German, Spanish and Italian. The package includes the latest ChessBase 9.0 Reader, a big reference database featuring more than 100,000 Queen's Gambit games, as well as a complete opening book that can be used to practice what you have learned with Fritz.