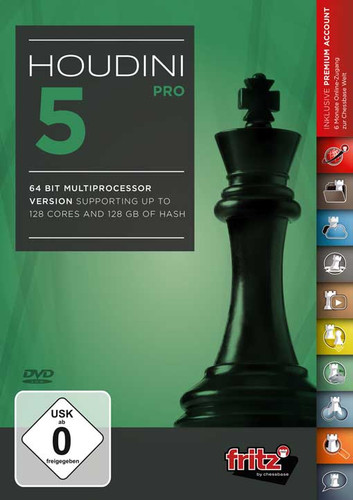 A multiprocessor engine capable of supporting up to 128 cores and 128 GB of RAM.
The right choice for power users with high-end, high-performance hardware.

The magician is back! With the latest version of his top chess program, Houdini 5, Robert Houdart has succeeded in catapulting himself back into the inner circle of computer chess, all while managing to maintain the unique and individual character of his engine.

Houdini's release took some time, being now almost three years since the appearance of its predecessor - but the wait has certainly been worth it! Houdini 5 brings a rejuvenated and reinvigorated engine to the board, weighing in at a staggering 200 Elo points stronger than Houdini 4! This represents a practically inconceivable jump in playing strength by today’s standards, and one that programmer Robert Houdart was only able to achieve by implementing a range of new techniques and ideas.

A decisive factor here is the completely redesigned evaluation function, which has been re-tuned to better take King safety and piece play into account. Houdini’s unique playing style is the result of a cunning combination of aggressive playing ideas and healthy positional and strategic understanding. What makes playing and analyzing with Houdini 5 particularly exciting is the sheer plethora of ideas it comes up with – the program has all the hallmarks of unbridled creativity. Where other engines see no way to make progress, or head towards a draw, Houdini not infrequently conjures up hidden and surprising resources!

As opposed to its predecessor, Houdini 5 is more selective when arriving at candidate moves, which enables it to reach higher search depths. This modification pays off in all stages of the game, but particularly so when it comes to the endgame. For perfect endgame play, Houdini 5 can use the Syzygy-Tablebases* (available on 4 DVDs as “Endgame Turbo 4”) combined with the Nalimov Tablebases, and is thus always able to find the quickest way to mate. Houdini 5 also uses the “lazy SMP” algorithm, meaning it is able to achieve better results on multi-processor systems than ever before. The new engine can harness the computing power of up to 128 cores simultaneously.

The preliminary release version of Houdini 5 won convincingly ahead of all other top programs in the recent “TCEC Season 9 Rapid” tournament, scoring 56 points from 62 games (50 wins and 12 draws). The final release of Houdini 5 surpasses even this performance by another 30 Elo points, making it currently the strongest program in the world.

* Tablebases are not included in the delivery of Houdini 5