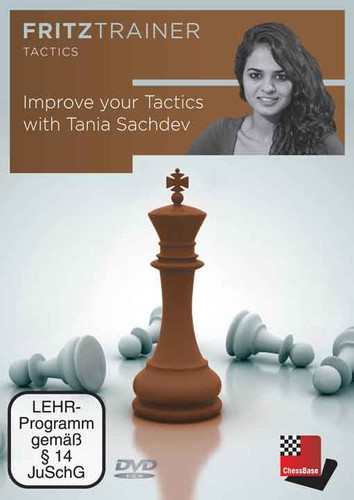 Improve your Tactics
with Tania Sachdev

My first chess DVD focused on various strategic middlegame themes and concepts, but in this second installment, the focus is on tactics - for after all, strategy and tactics go hand in hand, and playing strategically often leads to a resounding combinative finish. But for that to happen, you have to be able to build up positions through which tactics can flow - and this is exactly what I have illustrated on the DVD with a number of examples. The aim of this course is to help you understand how you to make tactical opportunities arise as w ell as to sharpen your tactical vision - these selected lectures will help to foster your overall tactical understanding. You can never spend too little time solving combinations and studies to improve your calculating abilities!åÒ
å¥ Video running time: 4 hours (English)
å¥ with interactive training including video feedback
å¥ Including CB 12 Reader