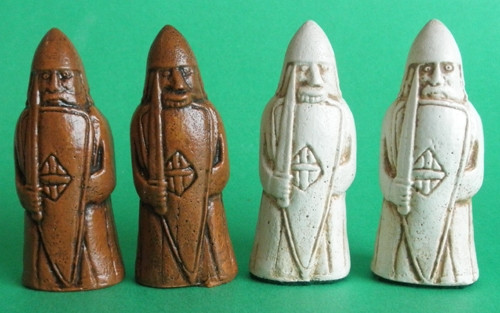 Isle of Lewis Themed Chess Pieces
The Isle of Lewis chessmen were featured in the movie Harry Potter and the Sorcerer's Stone.

Now featuring the famous Berserker (Warrior biting his shield) as the rook!

The Isle of Lewis chess pieces in Maple Brown have an antique ivory finish. The King is 3.5" tall with a 1.75" base. This set is made of hydrostone, a gypsum material, very hard, giving a natural feel, weight and look of the original.

A Bit of History - Isle of Lewis Chess Pieces

The Isle of Lewis (pronounced Lews) is in the northernmost of the Outer Hebrides - a barren, windswept land of swamps, rocks and peat moss. The Island has a rich legacy of ghosts and Druid spirits.

In the Spring of 1831, the sea eroded a sandbank on the Island's West coast at the South shore of Uig Bay, uncovering a stone building formed somewhat like a baking oven. This curious structure caught the eye of a peasant, who proceeded to break into it, says one contemporary account. He was astonished to see what he concluded to be an assemblage of Gnomes and Elves.

The original chess set from the Isle of Lewis has 78 pieces in all, carved in Morse ivory (Walrus tusk) which are thought to belong to eight or more incomplete chess sets. These Romanesque visages are unique in the annals of Medieval Art. Nothing quite like them has been found before or since. There seem to be no counterparts for the very simply adorned, compact, expressive figures with their strong, forceful faces. Experts are unanimous in declaring them the most astonishing collection of ancient chessmen in existence. The British Museum now houses 67 of these. The remainder are in the Edinburgh National Museum.

This array of Medieval Monarchs and Advisors faithfully reflects the tastes and customs of those times more than any other known set of chessmen. The artists have omitted no essential detail in their regalia or other vestments. Only the Pawns are abstractions - like tombstones, perhaps reflecting the expendable nature of peasants.

The details of the armor and costume were used by experts at the British Museum to estimate the age of the chessmen to be from the later part of the twelfth Century (1150-1170 AD). The most unusual feature of the set are the Rooks, which take the form of foot officers rather than towers - a common theme in early Icelandic chess sets, where they were called "Centurions." This suggests that the chessmen might have been carved in Iceland and carried to Lewis.

A note of interest, Katharine Briggs, in her Encyclopedia of Fairies (Pantheon, 1976) notes: "A tradition has arisen about them (the Lewis Chessmen). It is said that the guards who take the guard-dogs around at night cannot get them to pass the Celtic chessmen. They bristle and drag back on their haunches. So, perhaps the Highlander's superstition can be excused."