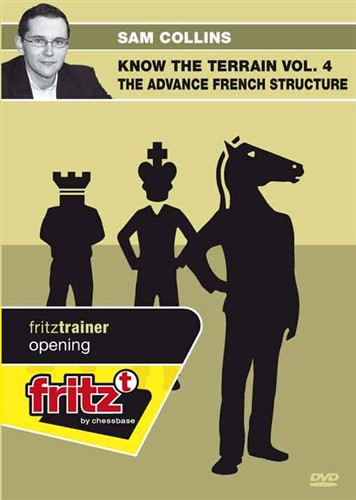 The information explosion has led to a massive increase in opening theory. But how often do you win a game with a prepared line? What gives strong players the edge over their opponents is not some blockbuster novelty, but a deep understanding of the pawn structures to which their openings lead - an understanding that lasts into the middlegame and endgame, and is transferable between different openings with similar structures.

In this DVD, Sam Collins looks at the Advance French Structure (white pawns on d4 and e5 against black pawns on d5 and e6, with an open c-file) which, while characteristic of 3.e5 in the French, is also typical of other French variations, the Advance Caro-Kann, the Queen's Indian, the Catalan, the Slav and various Anti-Sicilians. The blocked center forces play to the wings. White will normally concentrate on furthering his Kingside ambitions, supported by the space advantage conferred by his pawn on e5, either by piece play or by the typical pawn advances h4-h5 and f4-f5. Black, for his part, seeks Queenside counter-play, simplification, or a well-timed break with ...f6 leading to a central battle. The relatively closed nature of the positions leads to strategic play where knowledge of typical plans for both sides is of decisive importance.

Sam Collins is an International Master from Ireland with two GM norms. He has represented his country at six Olympiads, winning an individual gold medal at Bled in 2002. He is the author of several bestselling opening books. As a coach, he has lectured national junior squads and taught the master class at the renowned Berkeley Chess School. He has been national champion of Ireland and Japan.