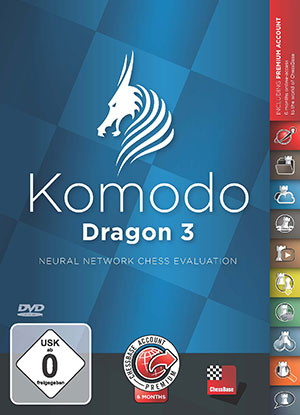 The new Komodo Dragon 3 engine has gained 100 Elo points in playing strength over its predecessor when using a processor core in blitz. That's a huge improvement for a program that already reached at an Elo level of over 3500! The gain is even greater (120 to 130 Elo points) for unbalanced openings, e.g. rare variations or gambits. On multiple cores or longer time controls the Elo gain can be somewhat smaller, due to the higher draw range.

The absolute gain in playing strength also offers real practical advantages: Komodo Dragon 3 takes only about a quarter of the time to play or analyze at the same level as Dragon 2! Or it plays better chess in the same time on a single core than its predecessor did on four cores. The large Elo increase is due to a new net structure for NNUE with a corresponding new net, as well as various optimizations and improvements in the search.

Komodo Dragon 3, One for all: Playing strength freely selectable between Elo 1 and 3500

The previous playing level scheme model has been replaced in Komodo Dragon 3 with arbitrarily adjustable Elo strength settings from 1 to a maximum of 3500. The Elo values refer to human play in rapid chess and can be used to ensure balanced games. With reduced playing strength the engine makes the kind of mistakes that are to be expected from humans with rating level that is set. The Elo settings of Komodo Dragon 3 have been tested and tuned against many human players, of various playing strengths. It was optimized in the GM level in many rapid chess games against GM Alex Lenderman, who is part of the Komodo development team

From the Komodo Dragon 3 Team

Dragon uses NNUE (Neural Network Updated Efficiently) technology, originally developed for the game of shogi. Komodo has a great deal of chess knowledge in its evaluation. Training an NNUE network based on this evaluation was both an advantage and a challenge, requiring experimentation with architectures and data generation of billions of positions. The reinforcement learning phase for Dragon is in its infancy, but is already showing great promise.

Dragon 3 is a huge strength improvement over Dragon 2, roughly 80 elo at blitz on eight threads and 107 elo on one (using normal openings), about 132 elo in MCTS mode, and 148 elo when playing Fischerandom (chess960). It is a significant improvement over Dragon 2.6.1, about 17 elo on one thread blitz, about 20 elo in MCTS mode. The gains over Komodo 14.1, the last pre-dragon release (Nov 2020), are in the 300 to 400 Elo range on one thread, depending on mode and game type, all at CCRL blitz time control (2' + 1"). The improvement over Dragon 2 is due to a larger, "smarter," and better-trained net, to deeper search due to search enhancements, and to parameter tuning. The improvement from Komodo to Dragon is due to the embedded neural network providing much more accurate evaluation and also in some sense gaining an extra ply or so of search by seeing some tactics that a normal eval can not see. Our testing also shows that Dragon is especially strong in Fischerandom (960) chess, which was confirmed when Dragon won the TCEC FRC 2021 championship. Dragon also won the 2021 TCEC Swiss and Swiss2 championships (normal chess). We believe that Dragon will play in a more human-like style than standard Komodo since it relies on learning what actually works in games rather than just on pre-assigned values for eval terms.

The Skill levels have been replaced by Elo values, made much more human-like, and are now intended to correspond to human Fide ratings in Rapid chess, so for example an 1800 FIDE rated player should be closely matched with UCI Elo 1800 at 15' + 10". In the grandmaster range this was confirmed by test games between Elo = 2600 setting and Grandmaster Alex Lenderman. Also the MultiPV play of standard mode is dramatically improved from the initial dragon release, on top of the actual strength gain. Other features added since Komodo 13 include Armageddon mode, MCTS Optimism, Personalities, and Auto-Skill. Standard mode is usually the stronger mode objectively, while MCTS mode is usually better at setting problems for human opponents as it does not assume perfect defense, especially with more than a few seconds to consider, and is also stronger than standard mode when looking at several lines of play at once (MultiPV).