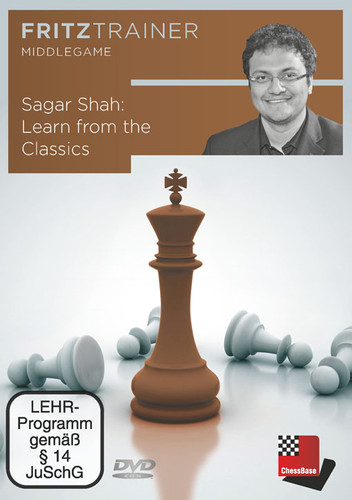 Learn from the Classics
Sagar Shah

Wise and successful players of the game have always told us to study the classics – games by the great masters of the past. But in this age of cutting-edge opening theory, preparation and engines, is studying the classics really that helpful? On this DVD, Sagar Shah does not merely preach. First, he shows you classical games of great legends such as Petrosian, Botvinnik, Fischer, Korchnoi and Kasparov, looking at typical patterns and ideas from the middlegame. The author then goes on to explain how you can use these ideas in your own battles – by showing you examples of applied classical knowledge from his own games! As well as looking at the middlegame, Sagar also focuses on the opening. The information explosion has ensured that opening theory continues to evolve at a rapid pace. The author shows that playing through the classics can help us establish a strong and stable feel for the initial phase of the game, and analyzes the opening duel between Botvinnik and Petrosian from their World Championship match in 1963. Going over these games will give you an excellent idea of how the classics can be used to prepare your own openings.

Sagar Shah is an International Master from India with two GM norms. He is an editor for the ChessBase news page and also contributes to ChessBase Magazine. His written work and analysis have received critical acclaim from readers around the globe, and he is adept at breaking down complex positions into easier ones with the help of simple, lucid explanations, but also believes in backing up his ideas with variations. Being self-trained, studying the classics helped him immensely in improving his understanding of the game, and also raised his level of play and results. On this DVD, he shares this experience with you.