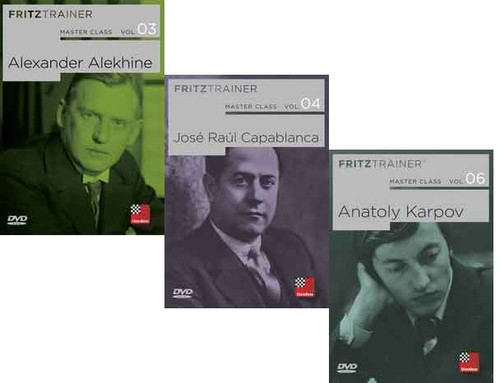 Alexander Alekhine, the fourth World Champion, played many fantastic attacking games and to this day enjoys the reputation of being an attacking genius. But ever since Alekhine won the World Championship match against Capablanca in Buenos Aires 1927 the chess world could see that the Russian-born Alekhine - who immigrated to France in 1921 - also handled technical positions excellently. But his success against Capablanca was still a surprise because the Cuban was considered to be virtually unbeatable.
After winning the World Championship Alekhine reached the peak of his career in the early 1930s winning famous tournaments such as San Remo 1930 and Bled 1931 by a huge margin. Moreover, the World Champion was also a prolific author and in annotating his games gave deep insights to the thinking of a World Champion. Alekhine was one of the best players in the history of chess and treated all phases of the game - opening, middlegame and endgame - in textbook fashion. No wonder a lot of later top class players, not least Garry Kasparov, claimed Alekhine as their role model in chess.
On this DVD Grandmasters Dorian Rogozenco, Mihail Marin, Karsten Müller, and International Oliver Reeh present outstanding games, stunning combinations and exemplary endgames by Alexander Alekhine. And they invite you to improve your chess knowledge with the help of video lectures, annotated games and interactive tests. The DVD also contains all known games by Alekhine, most of them annotated. Tables of important tournaments and various articles with background information complete the DVD.

He was a child prodigy and he is surrounded by legends. In his best times he was considered to be unbeatable and by many he was reckoned to be the greatest chess talent of all time: Jose Raul Capablanca, born 1888 in Havana. At the age of 13 he became Cuban champion; in 1909 he sensationally defeated Marshall by 8:1 and was thus catapulted into the world elite. It was only after some time, since only sparse amounts of information made it across the pond, that in 1911 Capablanca achieved well-deserved recognition by leaving the elite of world chess trailing in his wake in San Sebastian. It would however take another 10 years before the Cuban defeated the reigning world champion Emanuel Lasker in their match and wore the crown himself.

On this ChessBase DVD a team of experts gets to the bottom of Capablanca’s game. Niklas Huschenbeth presents the openings of the third world champion. Oliver Reeh has assembled a select choice of little combinations (Capablanca’s famous “petite combinaison”) and prepared them in interactive format. Mihail Marin looks into Capablanca’s strategic performances and finds astonishing parallels in the games of Bobby Fischer. Our end game expert Karsten Müller had a multiplicity of examples from which to choose, since Capablanca liked to liquidate into an endgame, being well aware of his particular strength and creating numerous masterpieces of the art of the endgame. The DVD also contains all of Capablanca’s games, many of them annotated and is rounded off by a biographical section, tables and both a tactics and an endgame database.

When Anatoly Karpov was 11 years old, he was invited to Botvinnik’s chess school. But the “Patriarch” passed a harsh verdict: “The boy has no clue about chess and therefore absolutely no future as a chess player.” Rarely was a judgement about a chess talent more wrong, for Karpov soon became the best player in the Soviet Union, growing to be considered a serious challenger to the reigning World Champion, Bobby Fischer. But in the World Championship match in 1975, Fischer refused to play and Karpov won by default, becoming the 12th World Champion. He nevertheless proved himself worthy of his title, playing in countless tournaments with exceptional results. Particularly impressive was his style. Thanks to Karpov’s brilliant feel for positional chess, which reminded many experts of Capablanca, he outplayed his opponents again and again with seemingly effortless ease.

If you want to improve your grasp of chess strategy, then there is hardly a better teacher than Anatoly Karpov! It took the arrival of Garry Kasparov for Karpov to have an opponent who could challenge him on an equal footing. On this DVD, a team of experts looks closely at the secrets of Karpov’s games. In more than 7 hours of video, the authors examine four essential aspects of Karpov’s superb play. Niclas Huschenbeth takes a look at Karpov’s openings. Our tactics expert Oliver Reeh tests your skills with interactive exercises, challenging you to find Karpov’s brilliant moves. Mihail Marin sees in Karpov’s play great similarities to Magnus Carlsen: by the time the opponent understands what is happening, it is already too late. For endgame expert Dr. Karsten Müller, Anatoly Karpov is “a living legend”. For him, Karpov has “an incredible feeling for the coordination and harmony of his pieces”, something which also shows in his endgames.