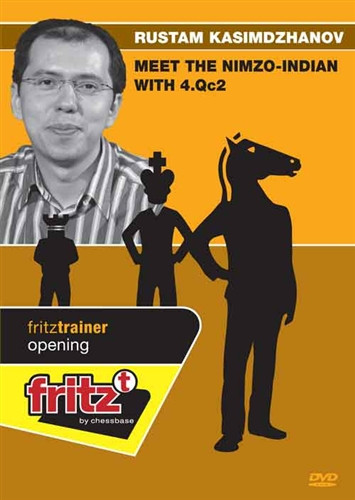 Meet the Nimzo-Indian with 4.Qc2! - Chess Opening Software on DVD

Meet the Nimzo-Indian with 4.Qc2!

Rustam Kasimdzhanov, the FIDE World Champion in 2004, is pre-destined to deal with the subject of the Nimzo-Indian with 4.Qc2, since he has been extremely successful with this opening both with White and with Black. The Usbek Grandmaster has also gathered valuable experience on the subject when working as a second to world champion Anand. Right from his introduction, Kasimdzhanov emphasizes that the Nimzo-Indian has a lot of advantages and that White is often left with a ruined pawn structure; that is precisely what the Queen move avoids. Of course in his investigations the author offers much deeper insights into the opening. In over 4 hours of video Rustam Kasimdzhanov explains all the important ideas, strategies and tricks helped by sample games in which the White side is presented, e.g., by Kasparov, Anand, Kramnik and Ivanchuk as well as the author himself.

Rustam Kasimdzhanov. Born in 1979, the Grandmaster from Uzbekistan has for many years been known as a very strong and imaginative player. However in 2004 Rustam Kasimdzhanov shocked the chess world by winning the FIDE world chess championship title, beating a string of world-class players like Ivanchuk, Grischuk, Topalov and Adams in the process. Kasimdzhanov is a very deep player, who is able to explain chess ideas in an eloquent,lucid style, with a fine touch of humor. His lessons are both entertaining and instructive - perfect for students who seek to avoid "dry" theory.