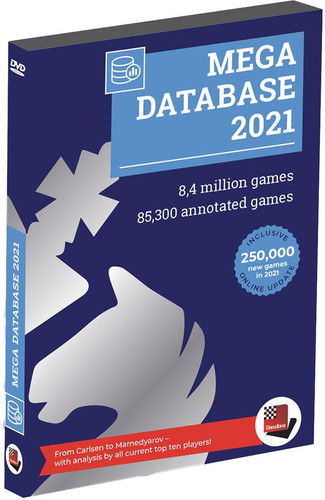 The ChessBase Mega Database 2021, with over 8.3 million games from between 1560 and 2020, is the exclusive chess database which meets the highest demands. With over 85,000 annotated games Mega 2021 contains the world’s largest collection of top class analyzed games. Train like a pro! With ChessBase 16 and the Mega Database 2021 prepare yourself for your opponent with great precision, let Grandmasters explain the best way to play your favorite variations, improve your repertoire and much more.

• Including Mega Update Service 2021: week by week bring your Mega up to date with your ChessBase 15/16 program with over 5,000 new games, that's roughly 250,000 new games by the end of 2021!
• New design, easier to use! Direct access to the games of the world championships and the great tournaments of the history of chess, and much more.
• Download a player encyclopedia with over 586,000 names of players and over 40,000 photos of players (only with ChessBase 14/15/16)