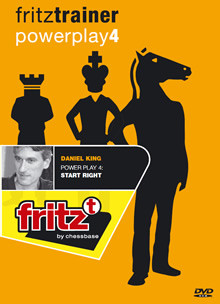 In this day and age of opening databases you might be surprised to find players getting caught out in the opening. Yet one sees it all the time. Players take liberties - they grab a hot pawn, attempt a complicated maneuver, or simply develop their pieces inefficiently. Whatever our playing strength, we need to take care in the opening. This DVD will help you to analyze and reassess your opening play so that you can begin the game on the right footing. At the end of the DVD you can test your attacking and defensive skills by examining a series of specially selected test positions. The Power Play series is suitable for anyone looking to improve their chess, but also provides ready-made lessons and exercises for a trainer.