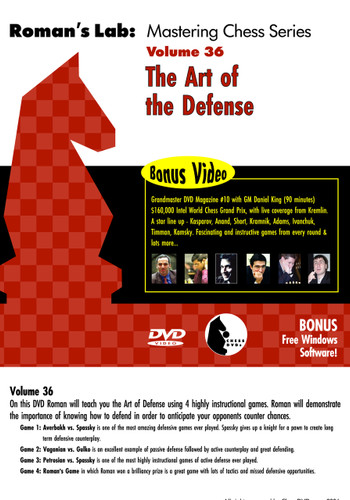 Over 2 hours and 45 minutes of Chess Instruction on DVD

In this edition Roman teaches the art of defense, using four highly instructional games. Roman will demonstrate the importance of knowing how to defend by anticipating the opponent's attacking possibilities and preparing counter chances.

Game 1 features Averbakh vs. Spassky is one of the most amazing defensive games ever played. Spassky gives up a Knight for a pawn to create long term defensive counterplay.

Game 2, Vaganian vs. Gulko, is an excellent example of passive defense followed by active counterplay - a great defensive model.

Game 3 is Petrosian vs. Spassky, one of the most instructive games of active defense ever played. Follow the twists and turns with Roman!

An amazing lineup or Super Stars: Kasparov, Anand, Short, Kramnik, Adams, Ivanchuk, Timman, Vyzhmanavin, Kamsky, Smirin, Azmaiparashvili, Ehlvest, Malaniuk, Yudasin, Shirov and Korchnoi battle for $160,000 in the first leg of the Intel World Chess Grand Prix. With live coverage from the Kremlin, you'll see round by round highlights with all the key games. Watch out for a series of dramatic time trouble escapades, amazing sacrifices from Shirov and Vyzhmanavin, lightning play by Indian speed star Vishy Anand, and Kramnik's brilliant with World Champion Kasparov. Fascinating and instructive games from every round!