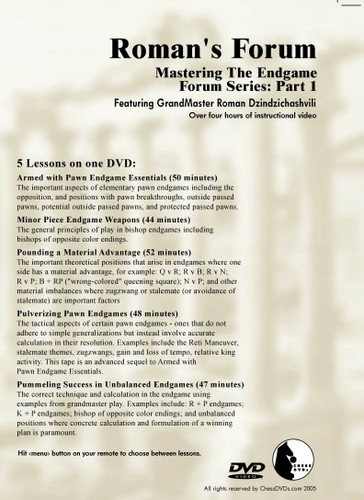 GM Dzindzichashvili discusses the general principles of play in bishop endgames including bishops of opposite color endings.

GM Dzindzichashvili presents the important theoretical positions that arise in endgames where one side has a material advantage, for example: Q v R; R v B; R v N; R v P; B + RP ("wrong-colored" queening square); N v P; and other material imbalances where zugzwang or stalemate (or avoidance of stalemate) are important factors.

GM Dzindzichashvili examines the tactical aspects of certain pawn endgames - ones that do not adhere to simple generalizations but instead involve accurate calculation in their resolution. Examples include the Reti Maneuver, stalemate themes, zugzwangs, gain and loss of tempo, relative king activity. This tape is an advanced sequel to Armed with Pawn Endgame Essentials.

GM Dzindzichashvili examines correct technique and calculation in the endgame using examples from grandmaster play. Examples include: R + P endgames; K + P endgames; bishop of opposite color endings; and unbalanced positions where concrete calculation and formulation of a winning plan is paramount.