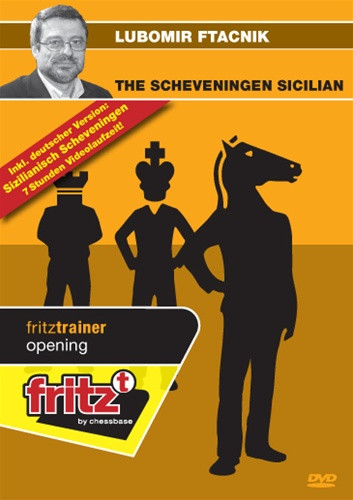 The name Sicilian Defense (1.e4 c5) describes a number of systems, each of which could easily be considered as an independent opening. The problems in the Paulsen, Richter Rauzer or Sveshnikov are complex, but the Sicilian pawn structures tie them all together. The Scheveningen Sicilian is central to an understanding of all the individual versions of the most popular response to the move 1.e4 - including the related Najdorf system. GM Ftacnik sets out to explain the vitality of the key Scheveningen line, a rich position offering scores of different plans for both sides. Players will learn to respect the importance of Black's central pawn structure d6/e6 and its deep and essential relationship to the different d6/e5 formation. All the grand attacking plans for White, led by the aggressive g2-g4 idea in the form of the Keres attack or currently by the wildly popular English attack, are explained with the help of the games by the world's best players. The Scheveningen DVD will enhance the way you see and understand all Sicilian systems.

Lubomir Ftacnik is a Slovak Grandmaster with decades of experience on the international chess scene. As a younger member of the strong chess generation in the former Czechoslovakia (Hort, Smejkal, Kavalek, Jansa, Plachetka...) he helped to win silver at the Lucerne Chess Olympiad 1982 - 1. USSR 2. CSR 3. USA. With 14 Olympiads and 17 complete seasons in the German Bundesliga behind him, the Slovak player thrives on stability.