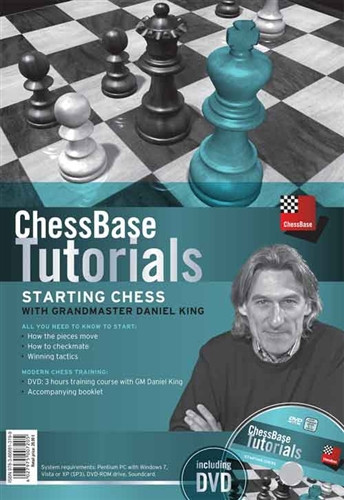 Chess is the ultimate board game. It has been played for over 1,500 years and, thanks to the internet, is becoming more and more popular. People from all over the world meet online to enjoy chess - to play, to learn and to spectate major tournaments.

With this DVD you can learn chess from scratch and join the world wide chess community. Daniel King, an experienced Grandmaster, teaches you in easy-to-follow videos all you need to get started: how to set up the board, how the pieces move and how to checkmate. After the basics, you'll learn about the best way to begin the game, about the most common tactical motifs, and you'll see how winning pieces can eventually help you to win a game. At the end of the course you can play through games by some of the world's greatest chess players and learn from their strategies.

The booklet (48 pages) which accompanies the DVD, gives you a quick reminder of all the rules, and some of the themes on the DVD. In addition it covers the history of the world chess championship - the ultimate prize in chess.

If you want to play straight away, install the playchess.com software from the DVD. Playchess.com is the world's largest chess server. You can meet people from every corner of the globe and play a game of chess online whenever you want.

All You Need To Know To Start:
å¥ How the pieces move
å¥ How to checkmate
å¥ Winning tactics

The Author: Grandmaster Daniel King has been a professional chess player for more than 20 years and has represented his country in numerous competitions, most notably in the historic win by the English team over the Soviet Union in 1990 in Reykjavik. King is the author of more than 15 chess books and has great experience as a trainer, assisting many of England's leading players. He is also well known for his broadcasting on TV, radio and the internet, commentating on the major chess events. King's Power Play DVD series, also published by ChessBase, has been highly praised by both customers  and reviewers.