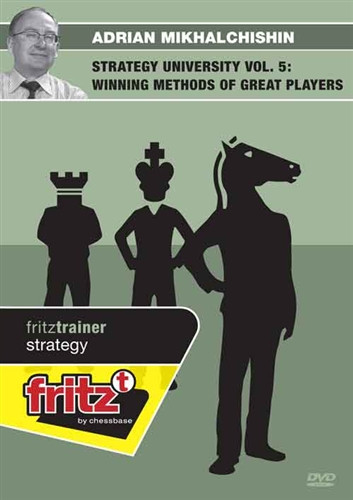 Using ideas and games of great masters from the past, the Ukrainian trainer deals with various themes.

1. The Soviet Grandmaster Vladimir Simagin was one of the first to employ the typical Exchange sacrifice: on one hand the Sicilian Exchange sacrifice ...Rxc3, and on the other allowing the "exchange" of a Rook on f8 against the White Bishop on h6 in order to go on and achieve a superiority on the black squares.
2. Attacks by Tal are presented under åÒBluffsåÓ, but the theme has a much more all-embracing heading, namely "drastically altering the course of a game".
3. Anybody can carry out double attacks, but how do you bring about the positions in which they are possible? This theme, which is of course partly tactical in nature, is one of the most important ones which can lead to success in chess.
4. How to take on board the ideas of other players and then make use of them yourself.
5. Through his own games, the author shows how to recognise typical mistakes and study them with a view to avoiding them in the future. 6. To finish off, the DVD introduces some legendary Soviet players: Yuri Razuvaev, VitalyTseshkovsky, Oleg Dementiev and Viktor Zheliandinov.

Adrian Mikhalchishin, a Grandmaster since 1978, is currently among the top 5 world trainers and the Chairman of the FIDE Trainers' Commission. He trained the team of USSR in 1980s, national teams of Slovenia, Poland and the Netherlands, and was the trainer of Anatoly Karpov (1980-1986),trained Zsuzsa Polgar, Alexander Beliavsky, Maja Chiburdanidze, Arkadij Naiditsch and Vassily Ivanchuk.