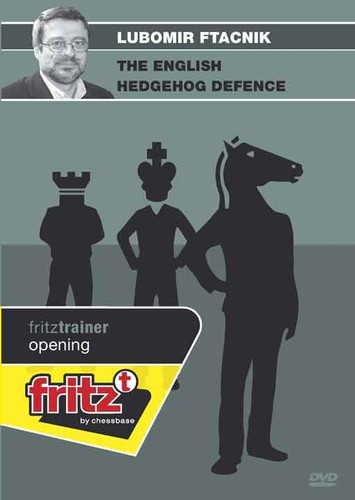 This chess opening DVD by Lubomir Ftacnik deals with the Hedgehog structure and its phenomenal potential for generating active counter-play with Black. The appeal of elastic piece development around a dynamic pawn structure has helped to spread this concept to many other openings. The author has consciously limited his survey to the English Hedgehog with an emphasis on the challenges Black faces following the centralization of White's Queen after 1.c4 c5 2.Nf3 Nf6 3.Nc3 e6 4.g3 b6 5.Bg2 Bb7 6.0-0 Be7 7.d4 cxd4 8.Qxd4. While Black will have to survive various challenges to his position, as the aggressor enjoys a slight advantage in development and has great freedom of movement for his pieces, once the defender manages to fend off direct attacks, his prospects are usually quite promising. The idea has stood the test of time and has been resistant to the plethora of rather ingenious ideas White players have come up with over the last two decades. The rise in popularity of an alternative plan with 7.Re1 is a strong indicator that Black emerges from the main lines in good health. Any player able to cope with some pressure in the English Hedgehog will be amply rewarded with flexible, action-packed positions, and plentiful Black counter-chances.

Lubomir Ftacnik is a Slovak Grandmaster, long term cooperator of ChessBase and diligent analyst. For this DVD he has used his experience of three decades on the international chess scene. Just as they have done for many top players, the openings with 1.d4 have served him well throughout his active career. The lines against various defenses have been forged in the fire of battles over the board. Learning more about the 1.d4 repertoire will bring any player a few steps closer to the coveted Grandmaster level.