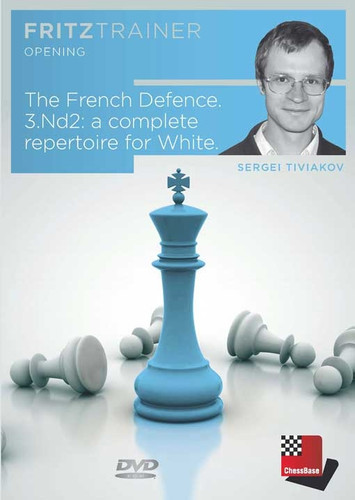 The French Defense, 3.Nd2:
A Complete Repertoire for White

The aim of this chess DVD is to provide the player with White with a complete repertoire with 3.Nd2 - an excellent weapon with which to fight the French Defense, as the author of this DVD explains. Based as it is on his personal experience and the latest theoretical developments, this DVD is an excellent starting point from which to learn how to play 3.Nd2, the Tarrasch Variation. Sergei Tiviakov has been very successful in beating the French Defense with an overall score of 80% (well above average) from 219 games played.

The DVD contains lots of exclusive information and databases not available anywhere else. The main database consists of about 312,000 games. All the games the author has played in the French Defense are provided, many of which have not been published previously. Also, there are on this DVD a reference database and a database with annotated games. It also contains interactive training: test yourself and find out if you have mastered your new repertoire and if you are ready for battle at the board. Video feedback on your proposals is also included! Everything makes this DVD a must-have one if you want to learn how to play against the French Defense by choosing 3.Nd2.

* Video running time: 5 hours (English)
* With interactive training including video feedback
* Exclusive Database with 312,000 games
* Database with all games the author has played against the French Defense
* Including CB 12 - Reader


It's your move! The New Fritz Trainer Generation

Interactive, communicative and efficient. These are the distinguishing features of the recently developed training format by ChessBase. You are transformed from a spectator into a participant! Answer every one of your trainer's questions by entering a move. It doesn't matter whether you score a bullseye or not: your trainer will provide you with feedback. Like that, you assimilate variations and motifs with every move!