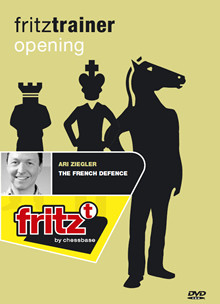 The French defense is a very powerful opening against 1.e4 players who play aggressively. Against the French you have to understand the underlying positional themes. If you do not, you will quickly get into a difficult position. As all major openings are, the French defense is full of important concepts and variations.

Many books leave the student with lines and ideas that are easy to get confused. In this DVD you will be presented a coherent strategic opening repertoire against 1.e4. The main theme is to attack white's center with the f- and c-pawns initially, followed quickly by the pieces.

The recommended repertoire is based on understanding rather than memorization. The idea is to give you an integrated understanding that will lead you to solve all kind of problems over the board. You will learn which pawn formations in the center to strive for, to be able to implement powerful maneuvers and to recognize small strong moves. You will also learn when it is time to switch to an attack against the opponents king.

The recommended lines are solid and you will be able to play the lines many years without having to bother too much about recent developments.

International Master Ari Ziegler is a renowned theoretician in Sweden. He has a long career as a chess teacher which begun already 1981. Here he happily shares his own repertoire and some unplayed Novelties with the viewer.