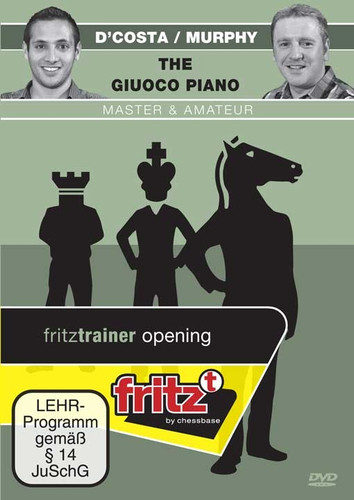 The Giuoco Piano (Italian for åÒquiet gameåÓ) is the oldest recorded chess opening, appearing as one of 12 chess openings detailed in the GÌ¦ttingen manuscript over five hundred years ago. It is popular with juniors and chess novices, as the basic ideas of this opening are simple to understand: rapid development, control of the center, and an attack on the vulnerable f7-square. However, this reputation belies its sophisticated and fearsome nature, and it is played even today by many of the world's top players, including World Champion Vishy Anand and Magnus Carlsen.
In the first ever English åÒMaster & AmateuråÓ ChessBase DVD, International Master Lorin D'Costa and chess-software expert Nick Murphy take you through the main ideas of the Giuoco Piano in an easy to follow, conversational style. In this DVD they examine:

The Master and Amateur series gives you the advantage of an expert's chess knowledge combined with an amateur player asking the questions that YOU want to ask.

Lorin D'Costa is an International Master from London, England. He is a professional chess coach and author of three chess books. He has coached some of England's best young talent, and the England youth squad at both the World and European Youth Championships, with pupils winning medals at these prestigious events.

Nick Murphy is an actor and chess enthusiast - and an acknowledged chess software expert. Born in Yorkshire and living in London, he has released two DVDs: åÒGuide to ChessBaseåÓ & åÒGuide to FritzåÓ and regularly provides videos for chessbase.com on how to get the most from new ChessBase software.