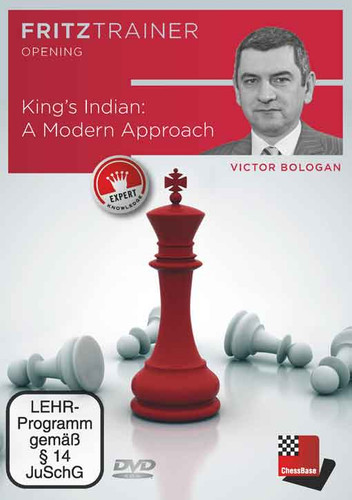 Author Victor Bologan about his DVD: “If chess players are in Iceland, they usually pay tribute to the genius of Bobby Fischer, the 11th World Champion, by visiting his grave in Selfoss in Reykjavik. With this DVD I also want to express my gratitude to Fischer: for his great contribution to chess in general and because he helped to make the King’s Indian more popular in particular. As a junior, when I was ten years old, my coach advised me to study the openings of Fischer and I discovered the King’s Indian. Later I learned about the different approaches Black has in the King’s Indian. He can keep his structure flexible and put his pawns on d6 and c6; he can play the sharp and principled ...Nc6 in the classical lines and in some sidelines he can sacrifice a pawn with …b5 as in the Benko. Top players such as Geller, Smirin, Kasparov, Radjabov, Nakamura and Ding Liren all play the King’s Indian and they all have a different style, a different approach.

• Video running time: 7 hours 14 min. (English)
• With interactive training including video feedback
• Database with more than 50 instructive games, extensive analysis of the theory shown on this DVD
• Including CB 12 Reader

Victor Bologan is a pupil of the top Moldovan trainer Vecheslav Chebanenko. For many years Bologan has been the number one in Moldova and has represented his country in ten Chess Olympiads. He has won over 50 international events. His greatest successes were in 2003, when he first won the Aeroflot Open and then the famous Dortmund Tournament, ahead of Kramnik and Anand. Bologan has extensive experience as a trainer and has also published five chess books and 21 ChessBase DVDs.