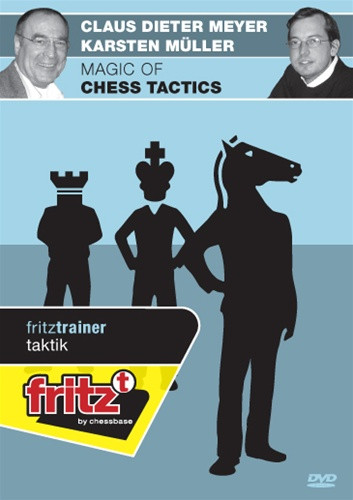 Tactics in chess is the art of combat command. When tactics dominate, then concrete action is required immediately in order to put a plan into practice or to grab an opportunity. However, in complicated positions and with determined resistance basic tactics are often insufficient and intuition, imagination and precision are necessary. The Magic of Chess Tactics DVD helps to develop these qualities, and to that end offers a multitude of highly interesting, thoroughly analyzed examples as well as detailed explanations and exercises. Special focus is given to those positions which are beyond a quick solution, putting concentration and calculating power to the test. This chess DVD also contains much instructive material and chess training courses.

The Magic of Chess Tactics, which in 2002 was originally published as book in the USA, has been considerably improved and expanded over the last few years. Now it is presented as chess training DVD for the first time in the popular ChessBase format - together with Fritztrainer videos where Grandmaster Karsten MÌ?ller demonstrates a selection of attractive tactical duels. Beside correcting the original book - some analysis even had to be turned upside down - this DVD also contains many additional tactical brilliancies, including a collection of the creative achievements of the five great masters of attack: Tal, Spielmann, Neshmetdinov, Stein and Bronstein.

The Magic of Chess Tactics is a demanding training DVD aimed primarily at aspiring chess players from club to master level who need practical study on the basis of thorough and critical explorations of fascinating middlegames and endgames. There has never been a more reliable way to achieve better chess understanding.

Fide Master Claus Dieter Meyer, one of the most experienced German åÒA-trainersåÓ and for many years officially in service of SV Werder Bremen, is also well known as the author and translator of numerous chess publications. Co-author Grandmaster Dr. Karsten MÌ?ller, who has played for the Hamburger SK in the German Bundesliga since 1988, is in great demand as trainer, author (Fundamental Chess Endings) and member of the ChessBase staff. As one of the best endgame experts MÌ?ller was honoured in 2007 as "trainer of the year" by the German chess federation.