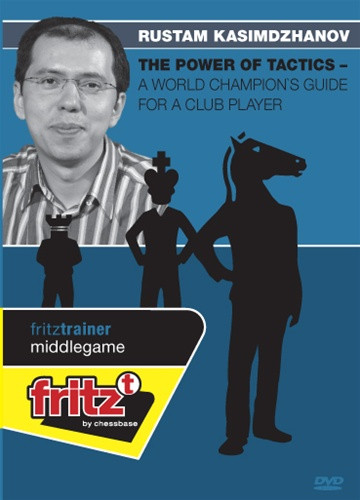 Rustam Kasimdzhanov:
The Power of Tactics - A World Champion's Guide
for a Club Player

Rustam Kasimdzhanov explains tactics in the most amazingly simple way. In his opinion there are only three elements which are really important and which therefore decide most games: "pins", "double attacks" and "back rank weaknesses". The 2004 FIDE World Champion explains these three elements by starting from simple model positions and going on to examine progressively more complicated examples. One important factor in his explanations is always how to spot the underlying patterns in practical play and then bring them into existence. This is because it is rare to be able to execute tactical blows immediately - the correct preparatory moves have to be played first. The motifs he is dealing with occur so often in practice that Kasimdzhanov had absolutely no problem in finding sufficient up-to-date material.
Video running time: 4 hours 20 min.
Rustam Kasimdzhanov. Born in 1979, the Grandmaster from Uzbekistan has for many years been known as a very strong and imaginative player. However in 2004 Rustam Kasimdzhanov (pronounced "Kah-zeem-jha-nov") shocked the chess world by winning the FIDE world chess championship title, beating a string of world-class players like Ivanchuk, Grischuk, Topalov and Adams in the process. Kasimdzhanov is a very deep player, who is able to explain chess ideas in an eloquent, lucid style, with a fine touch of humour. His lessons are both entertaining and instructive - perfect for students who seek to avoid "dry" theory.
System requirements: Pentium-Processor at 300 Mhz or higher, 64 MB RAM, Windows 7, Windows XP, Windows Vista, DVD drive, mouse, soundcard.