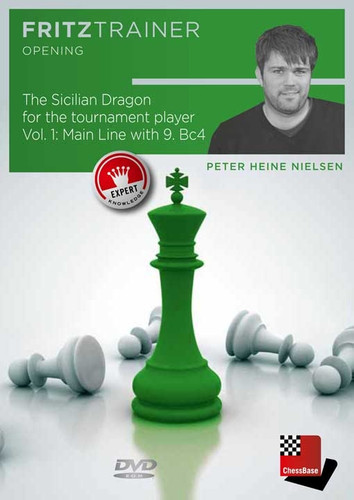 The Sicilian Dragon (Part 1): Main Line with 9.Bc4 - Chess Opening Software on DVD

The Sicilian Dragon for the Tournament Player
Vol. 1: Main Line with 9.Bc4

The Dragon is one of Black's most daring openings, leading to fascinating positions with opposite castling and strong mutual attacks. This DVD provides a complete and up to date repertoire to help Black to score with the Dragon. Daring exchange sacrifices are mixed with in-depth analysis of Black's most reliable defenses to give Black numerous options to play. The DVD includes games from the world's elite, correspondence games and even engine-games to bring you up to speed with current developments in the Dragon. White players afraid of the Black attack in the main lines of the Dragon with 9.Bc4 often go for safer options such as 9.0-0-0, 9.g4, or more positional lines based on castling Kingside. The DVD covers all these lines, offering sound solutions for Black against White's best tries while showing how to exploit White's more dubious tries. The DVD is aimed at the ambitious tournament player who wants a sharp but well founded repertoire that puts immediate pressure on his opponent. But it is also for all chess players who want to know more about the secrets of what might well be the sharpest of all chess openings.