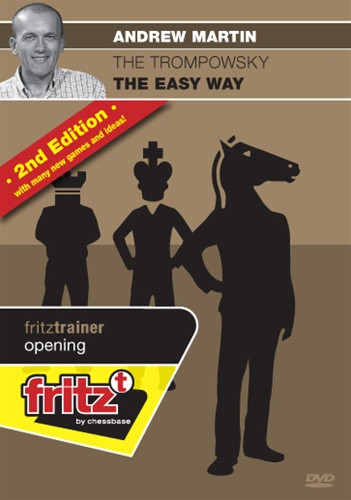 Trompowsky - The Easy Way (2nd Ed)
With many new games and ideas!

Thirty years ago the Trompowsky opening was almost totally unknown. It took a few spectacular games by Rafael Vaganian to bring 2.Bg5 into the limelight, and after that, the die was cast. Today 1.d4 Nf6 2.Bg5 is used by many of the best players in the world and a whole body of complicated theory has built up. In this fascinating DVD, International Master Andrew Martin traces the history of the opening from those early days, through the "golden age" of the late 1980's and 1990's, and shows how the theory and ideas have evolved into the sharp and dangerous weapon that the Trompowsky undoubtedly is today.
Martin simplifies the theory of 2005 and creates an easy-to understand repertoire for the White player that recaptures the pioneering spirit of those early days...with interest! He argues conclusively that 2.Bg5 can still lead to original chess. Games from Vaganian, Hodgson, Bellon, Miladanovic, McShane, Ivanchuk and a whole cast of excellent players help to demonstrate why.
Video running time: 4 hours
Andrew Martin is 52 years old and lives in Yateley, England. He is an International Master and noted chess trainer. He is also the Manager of Coaching for the English Chess Federation. He has written several best-selling chess books, including the recent "King's Indian Battle Plans" and "Secret Weapons."