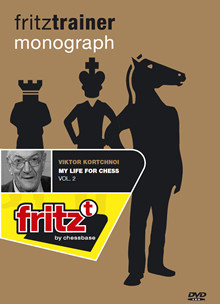 Volume 2 features about four hours of "Kortchnoi live." The great chess legend portraits the second part of his eventful career, presenting among other things his games against Kasparov (1986), Spassky (1989) and Short (1990) in his typical gripping style. Embedded in the game commentaries are many details of Kortchnoi's biography.

For instance, before commenting his game against Spassky, the veteran speaks extensively about his personal relationship towards the ex-world champion. Throughout these lectures you can feel Kortchnoi's ever-enduring love for chess. Whenever the great master gets to the heart of an opening (King's Indian, English and French) or shows an astonishing move, one can see the joy sparkling from his eyes. No wonder - hardly any other chess genius has lived chess as intensively as "Viktor the Terrible."

Victor Kortchnoi, two-times contender for the world championship, is a piece of living chess history. In the 60 years of his career, he crossed swords with practically all great players of the past and present, including Bobby Fischer and Garry Kasparov. A relentless fighter at the board, he expressed his never-ending love for the royal game in a very simple phrase: "Chess is my life."