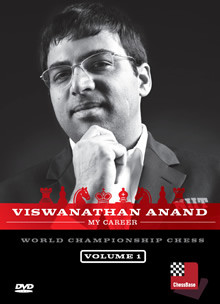 The first DVD with videos from Anand's chess career covers the very beginning of his career to 1999. It starts with his memories of how he first learned chess and shows his first great games (including those from the 1984 World Junior). The high point of his early developmental phase was winning the 1987 World Junior. After that, his career develops rapidly: the first victories over Kasparov, becoming a World Championship Candidate in both the FIDE and PCA cycles the high point of which was the World Championship match against Kasparov in 1995. 3:48 hours playing time.