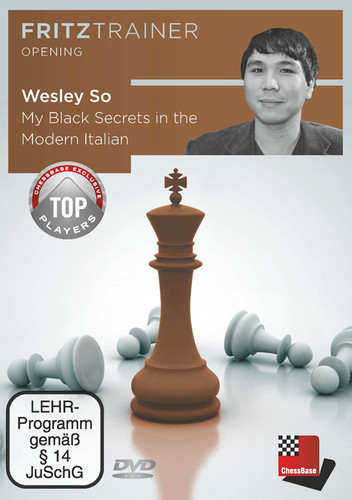 Wesley So: My Secrets for Black in the Modern Italian - Chess Opening Software on DVD

My Secrets in the Modern Italian for Black
by Wesley So

The Italian Game is considered a sound but quiet opening without early trades, giving rise to rich positions where plans are more important than forced variations - in short, an ideal avenue to outplay your opponent without having to learn much theory. But how should you approach new positions and keep a clear head in view of so many playable possibilities? The best way is this: you sit down next to a world class Grandmaster and just listen to him! In a total of nine video clips, top ten player Wesley So talks to IM Oliver Reeh, explaining his personal preferences as Black in the Italian game. The videos are structured according to specific concepts and ideas. Should Black play ...a6 to allow the retreat ...Ba7 or rather ...a5? What’s the best way to meet White’s plan with Bg5, be it with or without short castling? When is it possible to unleash the early raid ...Ng4 followed by ...f5? What are benefits of the Knight maneuvre ...Nc6-e7-g6 combined with ...Nf6-h5? Can one do without ...d6 and play ...d5 right away to sharpen up the game immediately? These and many more features the Grandmaster explains for Black, providing his White perspective too - as a top gun, So of course employs the Italian with both colors! By the way, directly after these recordings were made Wesley So played the London Chess Classic 2017 where he defeated ex-world champion Vishy Anand as Black, employing the topical ...a5 (instead of ...a6) which of course is also treated on this software. Plans, tricks and subtleties in the Italian Game, well-structured and conceptual, explained by a world-class Grandmaster - this video can take you towards the very top!