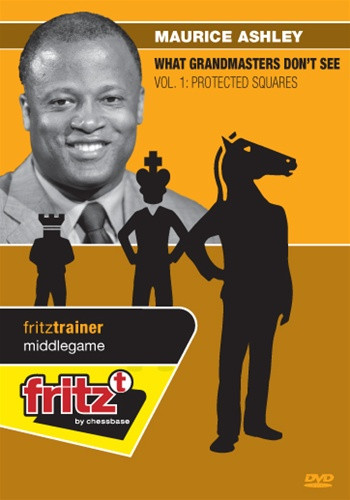 Many times when a top player blunders, it is routinely described by the esoteric term: "chess blindness." In the series What Grandmasters Don't See, chess trainer and world-class commentator Maurice Ashley strips away the myth, and for the first time explains why the root of these mistakes is more often based on the psychology of human learning.

In Volume 1 of the series, Ashley coins a new term "Protected Squares", and shows how many errors occur on squares that seem invulnerable because they are clearly guarded by pawns. In example after example and in his trademark style, Ashley will teach you how to avoid this kind of mistake and how to look for moves that will shock and amaze your opponents. In the first 19 videos on the DVD Ashley demonstrates both well-known and little known games in which a move on to a protected square plays an important part. In the second half of the DVD you are tested on what you have learned about protected squares with a series of exercises of increasing difficulty. This material is also drawn both from classics and from recent games.

Maurice Ashley is an International Grandmaster well known for his dynamic brand of chess commentary and effective coaching style. He was a commentator for the Anand-Kasparov World Championship match as well as all of KasparovåÔs epic computer matches.